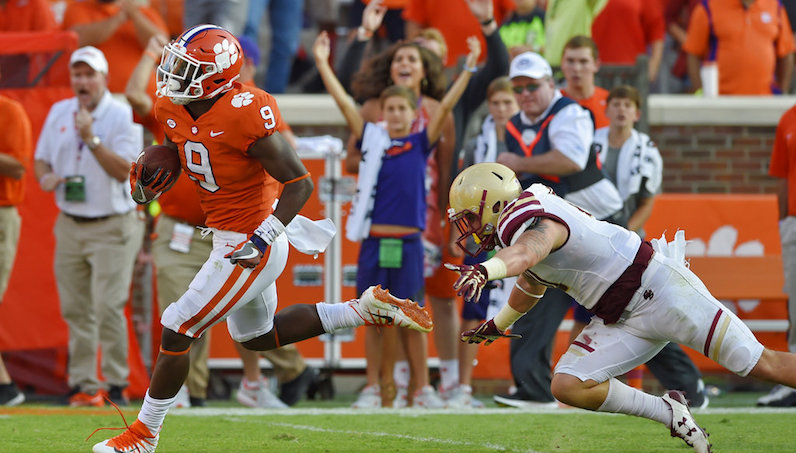 At Clemson, the future is now. It’s not just electric quarterback Kelly Bryant; freshman speedster Travis Etienne is making a name for himself, too.

The No. 2 Clemson Tigers are rolling as they head into Saturday’s primetime showdown with No. 12 Virginia Tech. It’s not just the team’s world-altering defense; the offense is loaded with absurd playmakers.

In the words of my guy Stugotz: Travis Etienne can scoot. Now, let’s take a look at some of the numbers.

Travis Etienne has played in only three games so far in his career; he’s one of five Clemson players with 20-plus carries. However, he may be the best — or certainly the most explosive — of this elite bunch.

Etienne has recorded 23 carries for 292 yards — an average of 12. 7 yards per run — and four touchdowns. According to Sports Reference, Etienne is one of only two FBS players this season to average more than 12 yards per carry on more than 20 carries.

The only other player that can stake this claim happens to reside in the ACC, too: the league’s top running back, Mark Walton of Miami.

Three of Etienne’s 23 carries have gone for 50-plus yards, including this lightning strike against Louisville.

In the No. 9 jersey, he looks like Wayne Gallman…if Gallman’s legs had been infused with rocket boasters this offseason.

In my humble opinion, that’s the best run I’ve seen in college football this season. Although if you run into Saquon Barkley, please don’t tell him I said that. Great, thanks. Glad we can be here for one another.

Etienne, the former four-star recruit, was done there, though. A week later, the rookie running back ripped off another monster run — this one put to bed any hope of a Boston College, too.

On the season, Travis Etienne has an Opportunity Rate above 52 percent, and is averaging a ridiculous 15.9 Highlight Yards per Opportunity, per Football Study Hall. This means that Etienne is getting at least five yards on over half of his carries, and when he gets beyond five yards, he’s averaging an extra 16 yards per opportunity.

That’s unsustainable; however, it’s also totally worth gawking at for the time being.

It’s a staple of the Dabo Swinney era at Clemson: the Tigers are always loaded at the skill positions. From the looks of things, Travis Etienne is the next generation. Catch him, if you can.

Next: What are Clemson’s options following Greg Huegel’s injury?