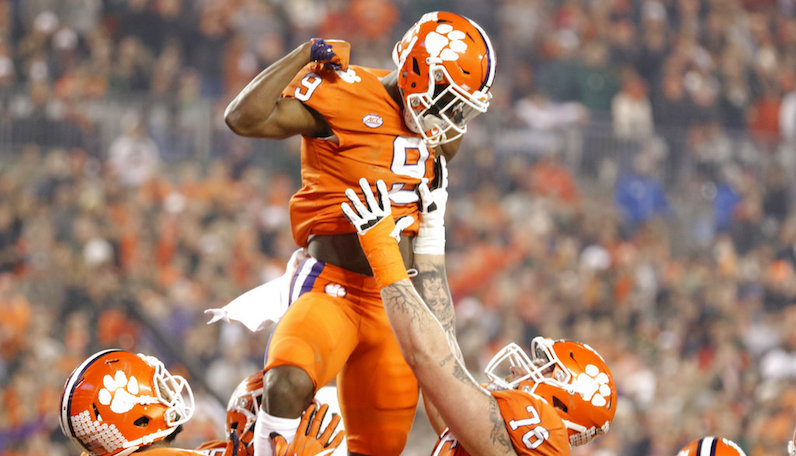 Clemson's Travis Etienne (9) celebrates with teammates after his touchdown against the Miami during the first half of the Atlantic Coast Conference championship NCAA college football game in Charlotte, N.C., Saturday, Dec. 2, 2017. (AP Photo/Bob Leverone)

As No. 1 Clemson’s sets its sights on No. 4 Alabama in the national semifinal, the Tigers will have a new player to go to bat with in the three-peat this season — a matchup that feels more and more like a de facto national championship game.

In the ACC Championship Game, the talents of freshman running back Travis Etienne were once again on display. Etienne touched the ball just nine times for 55 all-purpose yards, but his four-yard touchdown opened up the game’s scoring.

Etienne hails from Jennings, La. — population of around 10,000 people. The city is about three hours west along I-10 from New Orleans, which will be the site for Clemson-Alabama. A look at what the Crimson Tide will have to face in Etienne’s homecoming.

Travis Etienne scored his 13th rushing touchdown of the season against Miami — tied for the third most in the ACC. He accomplished this on only 103 carries, so far. According to Sports Reference, there were only 16 FBS running backs that ran for 10 or more touchdowns this season on fewer than 150 carries. Of that group, Etienne was one of only four players to also averaged at least seven yards per game.

Since the 2000 season, only 37 ACC players have rushed for at least 13 touchdowns. Only one player did so on fewer carries than Etienne: Duke quarterback Brandon Connette, back in 2013.

It took only a few games for Etienne to establish himself as one of the nation’s top big play threats on offense. His straight-line speed is something to behold. The numbers bear this out, too.

According to Football Study Hall, Etienne averaged 7.7 Highlight Yards per Opportunity. This means on plays when Clemson’s offensive line created at least five yards of running room for Etienne, the freshman back averaged 7.7 additional yards per carry.

This is how Etienne became one of only 10 FBS players with at least 150 rush attempts to also average at least seven yards per carry, per Sports Reference.

Etienne had four carries of at least 50 yards this season, which is tied for the most in the ACC. Again, considering the volume of carries, this is wildly impressive.

Over the next four weeks, the Sugar Bowl semifinal between Clemson and Alabama will be dissected in countless ways. However, the matchup between Etienne of Clemson and Bama’s top-five run defense, per Football Study Hall, will be something to watch.

Adding to the intrigue: Clemson has opened as a slight underdog to Alabama, and the Crimson Tide were once considered the favorite to land a commitment from Etienne when back was a 4-star prep prospect. If the Tigers plan to punch a ticket to the national championship game for the third straight season, they will need a game-breaking performance from Travis Etienne.