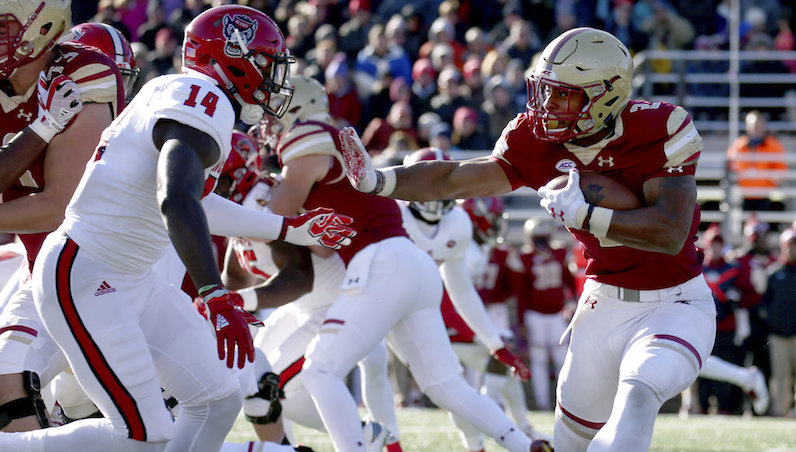 On Tuesday this week (July 17), we issued our list on the top five wide receivers in the ACC, which was led by Kelvin Harmon of NC State and Wake Forest’s Greg Dortch. Next up: sticking with skill position players — a look at the top five — er, six — running backs in the ACC.

Look, we at the ACC Analytics page have tremendous respect for Georgia Tech football; it’s an acquired taste, but the Yellow Jackets zig while most other zag. One of the more challenging positions in college football to play is the B-back spot for Georgia Tech, which Benson managed with style in 2017.

Benson, who ran for 1,053 yards last season, averaged 5.5 yards per carry (4.2 Highlight Yards per Opportunity), which is pretty impressive considering his Opportunity Rate (38.7 percent), and job description: run up the middle. The big kick-out plays this offense thrives under are set-up by the constant plunges of Tech’s interior runners.

Despite a lower volume of carries, Colburn gets the slight edge over Benson. Simply put: his advanced and periphery numbers are better. Colbun averaged 6.9 Highlight Yard per Opportunity, according to Football Study Hall — a really solid number.

The 2017 season wasn’t supposed to belong to Travis Homer; if the table was set for any Miami back to have a big year, it was Mark Walton, who entered last season as the league’s top returning running back. After an ankle injury against Florida State cost Walton the remainder of his junior season, though, Homer got the keys to the car. He didn’t disappoint, either.

Homer finished the season with 966 yards — over 74 per game, good for seventh in the ACC. According to Football Study Hall, Homer averaged 7.1 Highlight Yards per Opportunity, which is really good, too.

Miami is loaded at the skill positions in 2018, and Homer may be the best/most productive of the bunch. If he stays healthy, this will be a monster season. Home finished last season with 43 carries that resulted in a first down, and 31 carries of 10-plus yards. Look for him to build on that.

When it comes to sheer talent and speed, Travis Etienne probably tops the list of talents in the ACC — regardless of position. He’s that good and special of a player. But as a part of a loaded Clemson offense, Etienne has to split time, and make the most of his touches. Normally, that’s exactly what he does.

Etienne, who finished second in the ACC with 7.2 yards per carry, was one of only four FBS players to run for over 700 yards and 10 touchdowns on fewer than 125 carries in 2017.

He was the only Power Five player to hit those benchmarks last season, though. Dating back to the 2000 season, only one other ACC player has accomplished this — Karlos Williams, during Florida State’s title season in 2013.

According to Football Study Hall: behind Clemson’s offensive line, Etienne posted an Opportunity Rate of nearly 46.8 percent — nearly half of his carries went for at least five yards — and averaged a sizzling 7.5 Highlight Yards per Opportunity.

Cam Akers entered college football last season as one of the most-hyped rookies in America. However, as Florida State slid to start what would turn out to be a rocky 2017 season, Akers struggled for footing, too. Over the first month of the season, Akers ran for just 144 yards (four per carry) in the first three games. (It should be noted: those first three games were against some good defenses, too: Alabama, NC State and Wake Forest.)

Once he got going, though, Akers was dynamite. Over the final 10 games, Akers averaged over 88 yards per game and 5.6 per carry — plus seven rushing touchdowns. Akers finished the season as one of two freshman to run for over 1,000 yards on fewer than 200 carries — joined by Ohio State star J.K. Dobbins.

Akers collected 29 carries of 10-plus yards, and averaged 5.4 Highlight Yards per Opportunity. It’s fairly impressive, too, that he managed an Opportunity Rate of 42.3 percent behind what was a not-so-great offensive line.

It’s pretty interesting that the top three running backs in the ACC are all true sophomores, who burst on the scene in 2017. Of this group, AJ Dillon the chart-topper, though.

Going back to the 2000 season, only seven ACC players (Lamar Jackson, twice) have rushed for over 1,500 yards and 12 touchdowns. Dillon, who also ran for 14 touchdowns as well, is one of only two freshmen to accomplish this, too.

Dillon had an enormous workload — carrying the ball 300 times, which is a ton, including 211 carries over the final seven games (30.1 per game). Also dating back to 2000: he’s the only ACC freshman to record at least 300 carries in a season. (I’d suggest dialing this back, but that’s just me.)

Even with a high work/usage rate, Dillon was rather explosive: 5.6 Highlight Yards per Opportunity, according to Football Study Hall.

The top 5 wide receivers in the ACC: Harmon, Dortch and others