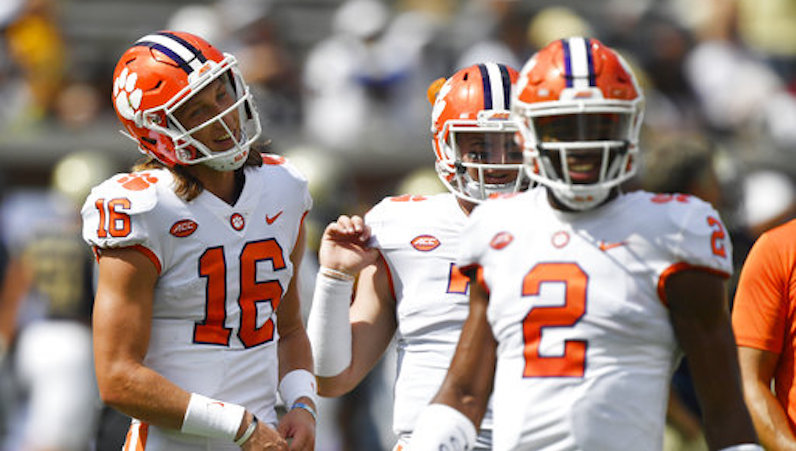 After toggling the quarterback joystick back and forth for the first four games of the 2018 season, Clemson has named Trevor Lawrence as its starter.

Few players entering college football this season were more ballyhooed than Lawrence — the No. 1 overall recruit in the 2018 class. Returning starter Kelly Bryant held the position down during the spring and offseason; in the final week of August, Dabo Swinney named him the starter.

In the first four games this season, Bryant completed 66 percent of his passes (8.5 yards per attempt) and threw for two touchdowns, too. He was solid on the ground as well: 4.8 yards per carry and two touchdowns. Bryant was also very good in the road win at Texas A&M.

However, Lawrence has been undeniably awesome — and he was spectacular against Georgia Tech. For the season, Lawrence has completed 64 percent of his passes (11.3 yards per attempt). He’s also thrown nine touchdowns to just two interceptions. In terms of total QBR (ESPN), Lawrence’s game against Georgia was the best quarterback performance of the season in the ACC.

You also have to wonder: With Alabama — now with its own shiny, new quarterback Tua Tagovailoa — off to a comically dominant start, if Clemson felt this move was necessary to keep up.

Clemson with Kelly Bryant — an objectively good quarterback — is a dominant football team. However, to contend with fellow superpowers, Clemson needs Trevor Lawrence to maximize its odds for winning another national championship.

Lawrence’s first career start will come in Death Valley against Syracuse; the Tigers are currently a 21-point favorite.

Musical Chairs: A look at the ACC teams in the AP Top 25 Poll