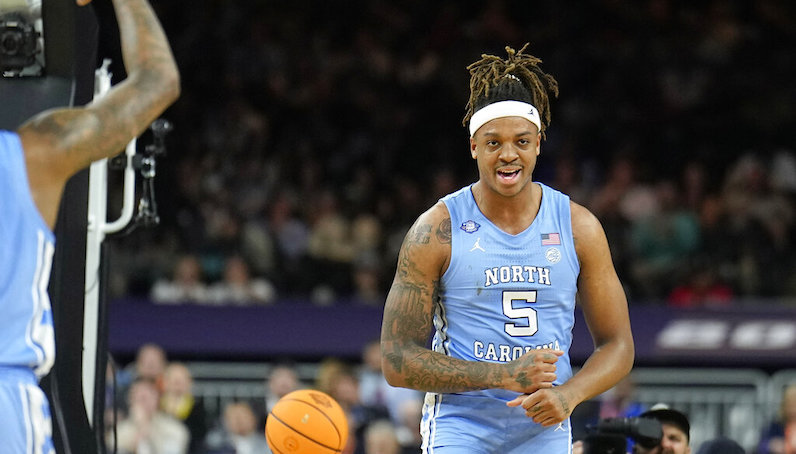 North Carolina forward Armando Bacot celebrates after scoring against Kansas during the first half of a college basketball game in the finals of the Men's Final Four NCAA tournament, Monday, April 4, 2022, in New Orleans. (AP Photo/Brynn Anderson)

Armando Bacot will return to North Carolina for his senior season. Less than two weeks after UNC’s season ended with a loss to Kansas in the NCAA Championship Game, the 6-foot-10, 250-pound Bacot announced his decision to return on social media.

During his three seasons with North Carolina, Bacot has appeared in 100 games, making 99 starts. He boasts career averages of 13.0 points, 10.0 rebounds and 1.3 blocks per game, while shooting 55.6 percent from the floor.

After an All-ACC season in the 2020-21 campaign, Bacot returned for the start on the Hubert Davis era on a mission. Paired with stretch-4 Brady Manek, in a new offense, Bacot had a career year. He finished second to Wake Forest’s Alondes Williams in the ACC Player of the Year vote.

Bacot averaged a double-double with points and rebounds: 16.3 points (56.9 FG%) and 13.1 rebounds per game. According to KenPom, Bacot ranked No. 10 nationally with a defensive rebound rate of 30.0 percent.

North Carolina’s offense was centered around clean spacing and Bacot’s interior dominance. Bacot scored 0.98 points per post-up possession (51.7 FG%), according to Synergy Sports. Partnered with RJ Davis and Caleb Love in the pick-and-roll, Bacot shot 68.1 percent on rolls or slips to the rim.

Bacot finished second among ACC players this season with 67 dunks.

As Manek spaced the floor, Bacot worked as a one-man wrecking crew on the offensive glass. Bacot ranked inside the Top 25 nationally with an offensive rebound rate of 14.9 percent: 4.2 offensive rebounds per game. According to Synergy, Bacot shot 56.4 percent on put-back attempts this year, too.

Bacot is more than just an post-up brute. He has skill, too: footwork in the post and a little bit of passing craft.

When opponents put two on the ball vs. UNC’s pick-and-roll attack, or drop vs. empty-corner actions, Bacot can make quality reads as a short-roll passer.

The return of Bacot is a significant floor-raiser for North Carolina’s 2022-23 roster. He’ll continue to be one of the best players in the country, a dominant hub on offense and an impact rebounder.

Manek has exhausted his college eligibility; UNC’s staff must find another stretch-4 to pair with Bacot. Puff Johnson is an option already on the roster; he showed some stuff down the stretch this season, too, including the title game vs. Kansas.

Dontrez Styles, who made some plays for the Tar Heels in the postseason, will factor into the equation, too.

However, with so much talent in the transfer portal, North Carolina can look for outside help as well.

The next roster questions will center on the decisions of Davis, Love and Leaky Black. Davis seems likely to return, which adds to North Carolina’s high-end projections for next season. He’s a savvy playmaker, who can bend defenses with his dribble-drives, make good decisions and shoot the cover off the ball.

(Dane Goodwin, Daivien Williamson are there in terms shooting, don't have AST%)

Love is more of a wildcard. He’s an interesting evaluation as an NBA Draft prospect. The defense is littered with red flags, but he’s long and has some tools on that side of the floor. Offensively, he struggles to separate in 1-on-1 situations and finish around the cup.

Despite a rough performance in the title game (5-of-24 FGA), Love may have raised his stock in the postseason. The processing isn’t always there, but he has deep shooting range (36 3P%), including from off the dribble, and that will always turn some heads in a positive sense.

Due to his size, defensive impact and passing abilities, the 6-foot-8 Black still has some intrigue as an NBA prospect. He could also return to UNC for a fifth season of college ball, work on his outside shoot and once again showcase his talents as an elite wing defender.

If all three of those guys come back, or even two of the three, UNC projects as one of the best teams in the country, one with the potential to contend for an ACC title and return to the Final Four.

Regardless, it’s nice that players like Bacot or Black have improved options now in the age of NIL money. It’s not perfect, but there’s at least some money to be made. Bacot is an amazing player, but he’s a more marginal NBA prospect. He can return to college and make a good bit of cash while further emerging as the face of UNC basketball and rewriting the program’s record book.