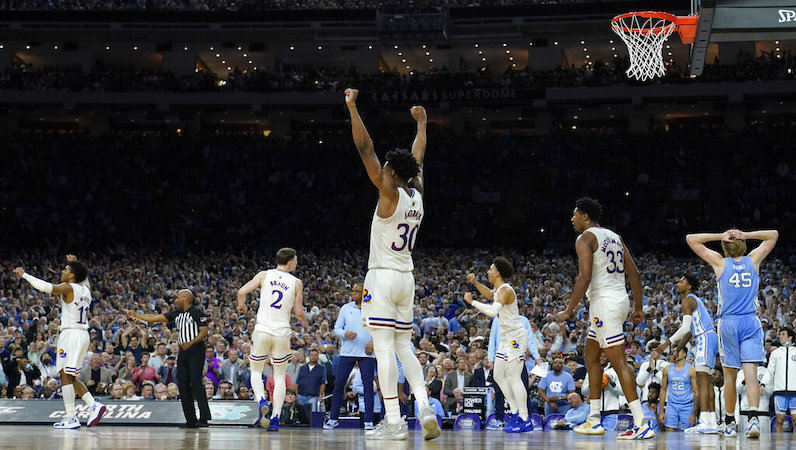 Kansas guard Ochai Agbaji (30) celebrates during the second half of a college basketball game against North Carolina in the finals of the Men's Final Four NCAA tournament, Monday, April 4, 2022, in New Orleans. (AP Photo/David J. Phillip)

After a strong start, UNC took a 15-point lead to halftime, 40-25. Kansas, however, roared out of the gate to start the second. The comeback victory for the Jayhawks marks the biggest comeback win in national title game history.

Love struggled with his shot all night. During the second half, though, he twisted his ankle, which may have cost him some necessary burst with the basketball. Regardless, after the best finishing game of his career vs. Duke in the Final Four, Love was just 5-of-24 from the field (1-of-8 3PA).

Caleb Love entered tonight shooting 37 2P% on the season, 36 2P% for his career — then went 8-of-10 2PA vs. Duke, including a couple daring finishes. Prior to, Love had never made more than 6 2-point field goals in a game. Historical performance.

With a 6-man rotation, UNC battled in this game; despite shooting 31.5 percent from the floor, the Tar Heels had a chance to tie this game. Love’s final 3-point attempt of the game fell short, though.

UNC went to Winner – Manek slipped so the timing on the pass wasn't there. pic.twitter.com/HByked20NR

RJ Davis was sensational at times in this game: 40 minutes, 15 points, 12 rebounds and two assists.

Once again, Armando Bacot suffered an ankle injury. The junior center still finished with 15 points (3-of-15 FGA) and 15 rebounds as he battled McCormack in the paint.

UNC played a tight rotation, which was to be expected. All five starters played 30+ minutes for North Carolina, with Davis going to full 40.

Sophomore forward Puff Johnson was the only true contributor off the bench; he played well, too. The southpaw scored 11 points and grabbed six rebounds in 18 minutes of action.

The victory marks the second NCAA title for Self. He led the Jayhawks to a national title back in 2008, too.