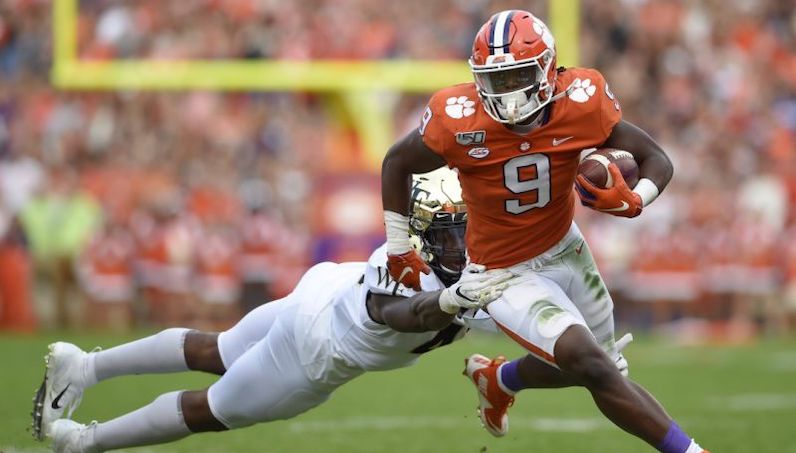 The first week of the 2020 ACC Football season is (somehow) here. An almost full slate of games is on the horizon — starting Thursday and continuing through Saturday night. Notre Dame is here, too. It’s going to take time to get used to some of this stuff.

Regardless, as the teams get ready to take to the field, here are our Week 1 ACC Football Power Rankings for 2020.

The Tigers must replace Isaiah Simmons, one of the most dominant defensive players in recent ACC history; however, the band is (mostly) back together for one more tour. The 1-2 punch of Trevor Lawrence and Travis Etienne will power an offense that must move on without star receiver Justyn Ross.

This season could be a one-off in the ACC for a Notre Dame team that absolutely has the goods to make the conference title game.

UNC has one of the premier go-go offenses in college football and oodles of talent: Sam Howell, Dyami Brown, Dazz Newsome, Michael Carter and Javonte Williams. Expectations are high; the Tar Heels won’t sneak up on anyone this season. Giddy-up.

UNC avoids Clemson, so it appears the Heels could put one hell of a run together until the 2nd ACC title game spot is decided in those last couple weeks.

(Again, including the previous schedule too just for completionism.) pic.twitter.com/n47SsJd8u9

No Gregory Rousseau is a big loss, but Miami’s defensive line still packs a serious punch; Quincy Roche should emerge as the unit’s Next Big Thing. Can the Hurricanes finally figure things out on offense? There’s a lot on the shoulders of transfer quarterback D’Eriq King.

Louisville got a boost in late August when transfer safety (Liberty) Kei’Trel Clark was granted immediate eligibility. With some of the best skill position talent in the ACC — Tutu Atwell, Hassan Hall and Javian Hawkins — the Cardinals have a chance to be incredibly dynamic on offense.

no other acc team has more than one.

Even without Caleb Farley, the Hokies return plenty of defensive talent. After a solid 2019 campaign, Hendon Hooker won the starting quarterback job, too, and he has plenty of firepower to work with, including transfer (Rutgers) running back Raheem Blackshear.

Virginia Tech will have to wait one week to start the season, though. VT’s matchup with NC State was moved from Sept. 12 to Sept. 26.

No Jaylen Twyman up front, but Pittsburgh still has two of the top defensive players in the ACC, ready to roll: Patrick Jones II (8.5 sacks in 2019) and Paris Ford.

After a rocky offseason, Florida State gets ready to open up its 2020 schedule and the Mike Norvell era in Tallahassee. There are still so many gifted players in this program, including several immediately-eligible newcomers to the roster. Defensive tackle Marvin Wilson is poised for a monster season.

Is Devin Leary ready to make a jump at quarterback? Expectations for NC State remain on the lower end in 2020, yet vaguely optimistic in some regions on the fanbase; however, an improved Leary could change the paradigm in Raleigh.

It’s a double-edged sword to host the No. 1 team in the country at the onset of the weirdest season in college football history. This can be a showcase game for a program that’s on the rise. But there’s also the potential to merely serve as a supporting actor while Clemson stunts in a crowd-less stadium.

Turning the page over from Bryce Perkins at quarterback won’t be easy, but on the other side of the ball, Virginia features a pair of edge rushers ready to terrorize opposing backfields: Charles Snowden and Noah Taylor.

UVA is the only college football team in the country that returns three players that had at least 50 tackles and 5 sacks last season.

Boston College has the league’s best offensive line and a premier running back: get ready for The David Bailey Show up in Chestnut Hill.

Chase Brice was named Duke’s starting quarterback, but he’ll make his debut for the Blue Devils on the road against Notre Dame without redshirt senior center Jack Wohlabaugh.

The 2020 season will mark just the second year of a rebuild for Geoff Collins. However, keep an eye on Georgia Tech’s backfield: Jordan Mason, Jamious Griffin and stud freshman Jahmyr Gibbs. Mason is one of the most efficient back in the conference.

2020 Preseason Predictions: Player and Coach of the Year candidates