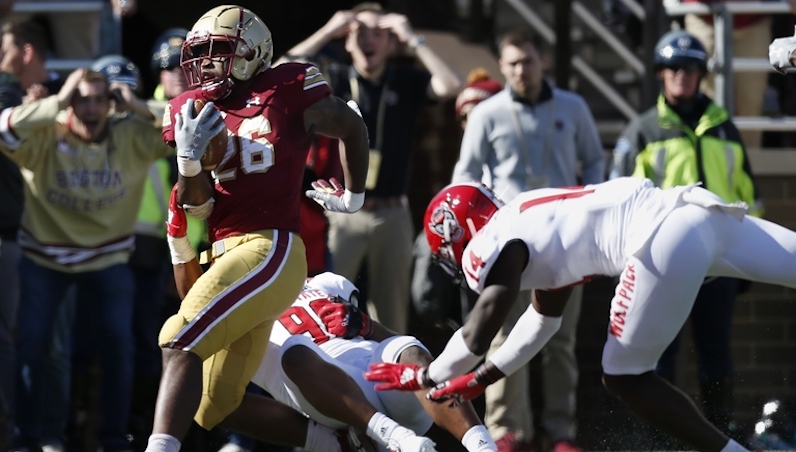 With the departure of All-ACC running back AJ Dillon — now a member of the Green Bay Packers — there are big shoes to fill at Boston College. However, David Bailey seems up for the task, and it’s one of the reasons he’s poised for a monster 2020 season.

While Dillon carried an absurd workload, Bailey found utility over the last two seasons as a solid backup and spot starter. Similar to Dillon (6-foot, 250 pounds), Bailey is massive running back: 6-foot-1, 240 pounds.

Only two players in the ACC last season had at least one game with 170+ rushing yards on 20 or fewer carries. Bailey hit those numbers twice, while Clemson’s Travis Etienne did it three times.

Good friends to have

As an entire conference last season, ACC offensive lines struggled — with two notable exceptions: Clemson and Boston College. The Eagles are once again set up to dominate along the line. First-year head coach Jeff Hafley is set to benefit from the work of Steve Addazio — recruiting and developing a strong line.

Last season, only 17.1 percent of Boston College’s carries were stopped for a loss or no gain, per ESPN. That percentage ranked second in the ACC, behind Clemson (15.1 percent). Boston College running backs averaged 6.13 yards per carry when seven or fewer defenders were in the box — one of two ACC position groups to eclipse the six-yard benchmark. (Clemson was the other: no duh.)

The Eagles also converted on 77.3 percent of their third-and-short run opportunities, which also ranked second in the league, behind Clemson (78.8 percent), again. Bailey picked up 10 first downs on 14 carries from third down, one-three yards to go.

Fortunately for Bailey and Hafley, BC returns four starters from its 2019 offensive line, while adding an influx of talent to the position group, too. Alec Lindstrom holds down the center position; Ben Petrula and Tyler Vrable bookend Boston College’s line as two offensive tackles with NFL potential. On the inside, Zion Johnson, the Davidson transfer (13 games, 7 starts), returns at left guard.

After redshirting last season, 6-foot-8, 330-pound tackle Jack Conley, a former 3-star recruit, joins the rotation. Incoming 4-star tackle Kevin Pyne — who had offers from Notre Dame, Auburn and Clemson — looks like a future stud. The same can be said for Ozzy Trapilo, another 4-star tackle and the No. 1 recruit for 2020 in the state of Massachusetts.

There are plenty of reasons why lots of people expect Bailey emerge as an A-1 back in the ACC. It doesn’t take a genius to figure this out; so many of boxes are checked.

So far, he’s been a very productive player on a decent sample size of touches: 205 career carries, 10 receptions. With an incredibly high-usage player like Dillon gone, the lane is clear for Bailey to get the lion share of backfield touches. By virtue of increased volume of touches, Bailey’s counting stats should blossom.

With arguably the best offensive line in the FBS paving the way, Bailey has plenty of advantages going for him, too. Dillon will go down as one of the top offensive players in program history; however, Bailey has an opportunity to write his own story, too.