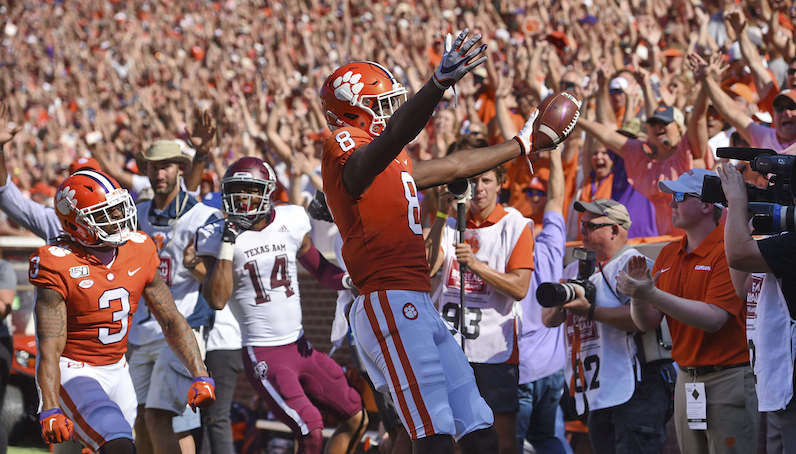 Clemson's Justyn Ross (8) and Amari Rodgers celebrate in the end zone after Ross scores a touchdown during the second half of an NCAA college football game against Texas A&M Saturday, Sept. 7, 2019, in Clemson, S.C. Clemson won 24-10. (AP Photo/Richard Shiro)

Earlier this week, Clemson announced that star wide receiver Justyn Ross will miss the 2020 season due to a spinal injury.

Ross dealt an injury during spring practice; at the time, Clemson believed the discomfort wasn’t too serious. Clemson said Ross was suffering from “stinger symptoms,” but was doing mostly fine. However, it was later revealed by an X-ray that Ross was born with congenital fusion. Ross isn’t in discomfort, but the issue will keep him out for the 2020 season, at a minimum, according to Dabo Swinney.

Surgery was set for Friday; on the afternoon beforehand, Ross took to Twitter.

Ain’t nothing in my life ever been easy .. this here ain’t nothing but a small bump on the road that’s gone make the story better .. I appreciate all the prayers and support .. im gone shock the world .. 💯 #GodGotMe #Free8💯 https://t.co/ofLE1Z73c3

A former blue-chip recruit, the 6-foot-4 Ross signed to Clemson’s 2018 class. Ross hit the ground running — or flying, however you want to look at it. As a freshman, he caught 46 passes for 1,000 yards and 9 touchdowns, while helping push Clemson to a 15-0 record and a national title.

Working with Trevor Lawrence, Ross dominated in the championship victory against Alabama: 6 receptions for 153 yards and a touchdown. This followed another dynamic performance against Notre Dame in the opening frame of the CFP: 6 catches for 148 yards and 2 touchdowns.

During the 2019 season, Ross teamed back up with Tee Higgins on the perimeter. Ross snagged 66 passes for 865 yards and 8 touchdowns. A tempting blend of size, speed and ball skills, Ross continued to cement his status as a coveted NFL prospect with serious upside.

With Higgins gone, the table was set for Ross to have a monster season in 2020. In theory, as the No. 1 receiver in Clemson’s high-octane offense, he could work with Lawrence — the potential No. 1 pick in 2021 — on one last trip around the block and a return to the national title game. That, however, must wait.