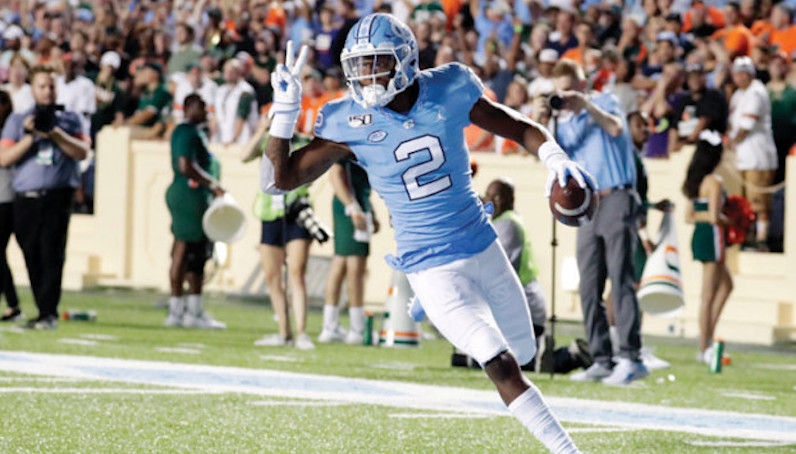 There’s a lot to like with North Carolina football at the moment. Recruiting is a serious boon; the 2021 recruiting class could be a historic haul for UNC. Quarterback Sam Howell is a rare talent, with at least two more seasons left in Chapel Hill as one of the most talented offensive players in the country. Say what you will about the validity of program momentum, but Mack Brown pretty clearly has the needle pointed in the right direction — with room for growth.

Part of what makes Howell’s hype so intriguing, though, is the volume of skill position talent on the roster, too. Both the operator and the system are in place to make the most of an ever-improving situation.

In the ACC last season, 17 different players caught at least 40 passes for 500 or more yards — 10 of which will return to college football in the 2020 season. From that group of 17, three played for North Carolina, the most of any ACC program: Dazz Newsome, Dyami Brown and Beau Corrales.

Outside of Clemson, no other ACC program can quite match this blend of established perimeter talent. It goes beyond the receivers, too. North Carolina’s offense can present problems with its running back depth as well. However, as Howell’s profile rises, the Tar Heels will need continued production from Brown, Newsome and Corrales. If Howell is the engine, these guys are the fuel supply.

It’s an overstatement to say that Dyami Brown came out of nowhere in 2019. He entered college with a profile. Brown is a former 4-star recruit (2018) from Charlotte; he saw the field some, too, as a true freshman in 2018, catching 17 passes for 173 yards and a touchdown, which came against Pittsburgh. During the 2018 season, UNC’s mostly pedestrian passing offense flowed through the left arm of Nathan Elliott and Anthony Ratliff-Williams.

As a sophomore, though, now teamed up with Howell, a gift deep-ball passer, Brown erupted. After getting off to a fast start, Brown never looked back.

Brown was one of just four FBS receivers in the 2019 season to finish with 1,000 receiving yards, 10 touchdowns and average at least 20 yards per catch. Two of the other players to hit those benchmarks were Oklahoma’s CeeDee Lamb — a magician with the ball in his hands, drafted 17th overall in 2020 NFL Draft by Dallas — and Ja’Marr Chase, who returns to LSU as arguably the best receiver in the country.

At 6-foot-1, with speed to burn, Brown makes for an appealing downfield target, which pairs perfectly with Howell’s arm velocity and ball placement. Brown led the ACC in yards per reception (20.3), receptions of 30+ yards (13) and receptions of 40+ yards (10).

Brown also became the first ACC receiver since Pitt’s Jester Weah in 2016 to average at least 20 yards per reception and catch 10+ touchdown passes in the same season. Going back to the 2000 season, only four ACC players have accomplished that: Brown, Weah, Phillip Dorsett and Snoop Minnis.

Brown’s 10 receptions of 40+ yards tied for third most in the FBS, just behind Chase and pass-happy LSU and quarterback Joe Burrow.

One of the better slot receivers in the ACC, Dazz Newsome proved to be an efficiently reliable target for Howell in 2019. However, Newsome wasn’t just an underneath weapon, snagging dink-and-dunk passes. There’s a serious vertical element to his game, too.

Newsome became just the ninth ACC player, since the 2000 season, to finish with 70+ receptions, 10+ touchdowns and average at least 14 yards per catch. There are some rather impressive names on that list, too: Calvin Johnson, Sammy Watkins (twice), DeAndre Hopkins, Jerricho Cotchery and Isaiah Ford.

UNC played in a several close games last season. The results didn’t always swing in North Carolina’s favor, although Newsome didn’t blink; the 5-foot-11 wideout adjusted himself adequately to the clutch moments. Newsome finished No. 1 in the ACC

On third-down, with 10 or more yards to go, Newsome caught nine passes for 143 yards. Eight of those receptions produced first downs, too. All of which led the ACC.