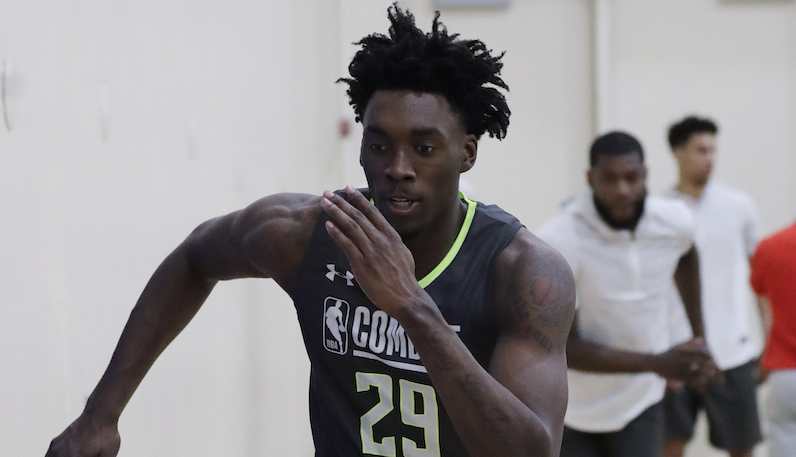 There were a lot of ACC players at last week’s NBA Draft Combine in Chicago, including several guys who helped raise their stock with strong performances. Let’s take a look at a few of the headliners, starting with Terance Mann and Nassir Little.

“I’m trying to catch the beat”

At the 2018 NBA Combine, three ACC players posted max vertical leaps above 40 inches: Josh Okogie (who had a nice rookie season in Minnesota), Trevon Duval and Grayson Allen. So far at this year’s event, only five total players stuck verticals north of 40 inches; the only one with a tie to the ACC is Jalen Lecque.

Lecque, the highest-rated signee NC State has landed under Kevin Keatts, has shown out so far at the combine. This has included sticking the combine’s top max vertical leap, too: 43 inches. In terms of standing vertical leap, Lecque posted the event’s second best number: 35 inches.

As for guys that actually played in the ACC this season, Terance Mann of Florida State and UNC’s Nassir Little both hit 38.5 inches on the max vertical chart.

Mann has long been one of the more intriguing draft prospects in the ACC — a slashing wing that can defend and finish at the hoop with the efficiency of a 6-foot-10 big.

This season, Mann added a 3-point shot to his arsenal (77 3PA, 39 3P%); according to Synergy Sports, he posted an effective shooting rate of 60.8 percent on half-court catch-and-shoots. These aren’t crazy large samples, especially after three seasons of limited range shooting, but if you believe in the shot, then Mann becomes an intriguing prospect.

Risers from the NBA Combine: @terance_mann
Mann was particularly impressive on Thursday, stuffing the box score with seven points on 3-of-4 shooting, five rebounds and four assists. On both days, I was impressed with Mann's ability to move without the ball and defend one-on-one. pic.twitter.com/r2EoNIePzm

Nassir Little: Where do we stand now?

After an up-and-down freshman season at UNC, Nassir Little’s stock took a bit of a hit; however, the combine offers the one-and-done forward a bit of an opportunity. Much will be made of his comments on North Carolina’s system, which can be warped into critiques of the staff. That, of course, comes without any real understanding of what challenges come from learning UNC’s style of play.

Naz Little is just insanely likable. Have said this before but that's really going to come through in the interview process.

Little answered questions at the combine with poise and honesty; what else could one want? Add that to his overall performance at the showcase event, and it’s easy to see why his stock may be on a bit of a rebound.

The athletic tools with Little are undeniable. It’s wildly impressive to see those explosive measurables on a powerful 6-foot-6, 220-pound frame. Little finished his freshman season with 35 dunks (2.1 per 40 minutes) while shooting 68 percent overall at the rim. (56 FG% around the rim in the half court, per Synergy)

On occasion, Little would show the entire package in one single possession — going defense to offense with impactful displays of rangy athleticism at the rim. Little averaged 1.2 blocks and 1.2 steals per 40 minutes (nearly 2.5 stocks).

The jump shot still remains a bit of mystery for Little, though. He posted an effective shooting rate of just 38.7 percent on catch-and-shoots this season at UNC, per Synergy. However, that sample is small, and his form is mostly fine, too. Little’s jumper is a swing pierce for how he projects into the NBA. Can he hit enough jumpers to force closeouts?

There were times this season when Little played slow — every offensive movement or defensive rotation taking a half-second longer than it should. Even some of his better outings — like the first two rounds of the NCAA Tournament — came against zones, when he could attack inside of 15 feet. At other times, though, he flashed the type of no-hesitation explosion that seemed to justify the pre-2018-19 season hype.

After participating in the 2018 NBA combine, Tyus Battle decided to return to Syracuse for his junior season. This year likely didn’t go quite as planned, though. Battle, forced into a role of carrying Syracuse’s milquetoast offense, spent most of the season gunning for a shot profile that would make Kobe Bryant proud.

And after a year mostly bricky, contested midrange jumpers, Battle didn’t receive an invitation for the 2019 combine. He did, however, participate in the G League Elite Camp; unfortunately, though, Battle wasn’t one of the players asked to then take part in the combine, too.

As Battle turns the page — one month away from the draft — he must focus on two things, especially in workouts: spot-up 3-pointers (his calling card as a freshman), and individual defense. Those midrange chucks that Battle was so found of the last two seasons are essentially obsolete for NBA role players now.

Can he tap into some 3-and-D wing potential? For that to happen, Battle must show that he can reliably play man-to-man defense — which is obviously tricky to forecast. He just spent 99 percent of his college career in zone.

Oshae Brissett, Battle’s teammate for the past two seasons, played his way into the combine, though, after a strong showing at the G League Elite Camp. (He was one of 10 to unlock that honor.) At the combine, Brissett continued to put in work.

Lots to dissect in this possession, starting with more troublesome on ball D from Nowell, losing Weatherspoon. Oshae Brissett makes an excellent pass from the baseline to the wing, and Weatherspoon finishes the possession attacking a closeout and dumping off to Brissett. pic.twitter.com/19eKTwixJI

Similarly to Battle, we’ve seen very little of Brissett in man-to-man scenarios; however, he measured extraordinarily well at the combine: 2.9 percent body fat, 6-foot-7 (height without shoes) and a +5 wing span (7 feet).

Brissett has never been an efficient offensive player (career 42.2 eFG%); so far in college, he’s a sub-31 percent 3-point shooter (227 3PA). He also shot under 55 percent overall at the rim, which isn’t great considering his physical attributes.

Regardlesss, Brissett has an excellent frame to project as a rangy, versatile defender on the next level. These are the things that he must continue to sell as a prospect.

Oshae Brissett told @Stadium that he will likely take his decision whether to return to Syracuse until the deadline on May 29th.

With Zion on the horizon, how does New Orleans make the most of this amazing opportunity?