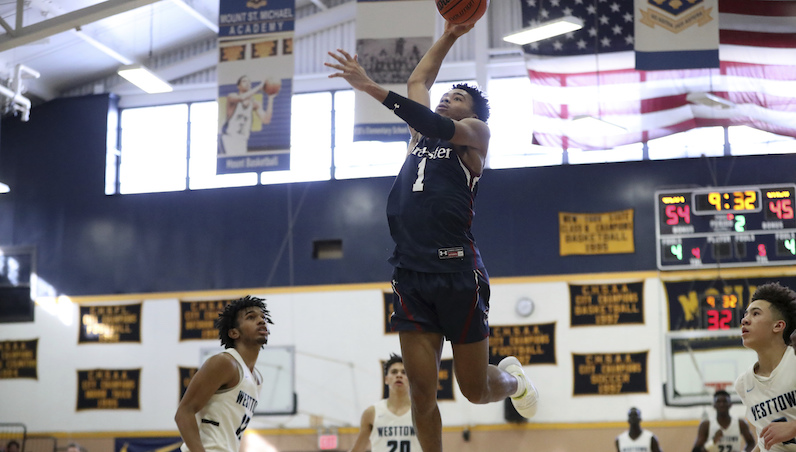 First reported by ESPN’s Jonathan Givony, NC State commitment and signee Jalen Lecque has submitted paperwork for the 2019 NBA Draft. As a fifty-year senior playing a post-grad year at Brewster Academy in New Hampshire, he will test his draft eligibility.

N.C. State commit Jalen Lecque has submitted paperwork exploring his eligibility for the 2019 NBA draft, his father Derrick informed ESPN. Lecque believes he is eligible for the draft as he is currently in his fifth year of high school: https://t.co/VPkTpsF9WF

This has long been a possibility for Lecque; in the spring of 2018, Lecque satisfied the NCAA’s graduation requirements. However, prior to going to Brewster, Lecque attended Christ School in North Carolina for the 2017-18 season — what was his fourth year of high school.

He did not, however, receive a high school diploma from Christ School, which is why he needed to petition of inclusion in this year’s draft, writes Givony:

He needed to petition the NBA for inclusion by submitting high school transcripts to the league office by April 11. Since he is a year removed from his original high school graduating class and turns 19 in the calendar year of the draft, as mandated by the collective bargaining agreement, he appears to have a strong case for inclusion

Going forward, Lecque will participate in the Jordan Brand Classic on April 20, which could work as a showcase event. If he is in fact deemed eligible for the draft, Lecque could be invited to participate in the draft’s combine. The combine takes place during mid-May up in Chicago.

Lecque has until May 29 to withdraw his name from the draft if he choses to do so.

A 4-star recruit, Lecque is rated as the No. 37 player in the 2019 class by 247 Sports. He committed to NC State over Tennessee, Kentucky and Auburn. He’s the highest-rated commit of the Kevin Keatts era at NC State.

They are not alone in this distinction, either. A handful of other NBA teams have reportedly trekked to watch Lecque play this season.