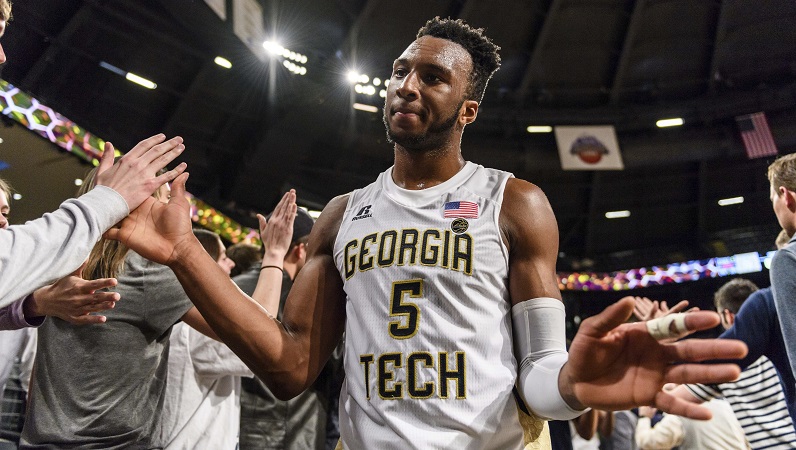 Georgia Tech guard Josh Okogie (5) celebrates with fans after their win over North Carolina State in an NCAA college basketball game in Atlanta. Okogie plans to skip his final two college seasons to enter the NBA draft, announcing his intention Thursday, March 15, 2018, through the school. He will not hire an agent, leaving open the option of returning to the Yellow Jackets. (AP Photo/Danny Karnik, File)

Okogie is an interesting prospect; in the build up to the draft, his stock is on rise. However, Okogie has yet to hire an agent. At this point, though, that’s probably a foregone conclusion. Okogie has impressed at the combine.

Earlier this week, players measured a variety of physical attributes. One of those measures — vertical leap — frequently draws plenty of headlines. This year, 40 players agreed to participate in the vertical leap test. Five of the top 13 leaps measured came from ACC players — with Okogie topping the list.

Okogie tied with Villanova’s Donte DiVincenzo for the top number this year: a max vertical leap of 42 inches. Trevon Duval (41.5 inches) and Grayson Allen (40.5 inches) of Duke ranked fifth and sixth, respectively, is the vertical measure. A little further down the list, their teammate, Gary Trent, ranked 11th: 39.5 inches.

(This is a nice development for Duval, too, who needs to convince teams to buy low on his ridiculous athleticism/upside potential. Duval also posted the second best standing vertical leap of 34 inches.)

Former Memphis high-riser D.J. Stephens, who now terrorizes rims over in France, has the combine record of 46 inches in the vertical leap.

Rounding out the list of standouts from the ACC this year — Miami’s Bruce Brown, who stuck 38 inches on his vertical leap. There were 14 players at this year’s combine that recorded a vertical leap of at least 38 inches.

On the other end of the spectrum, Virginia’s Devon Hall tied for last in terms of players who chose to have their verticals measured: 31 inches.

Just for fun, I thought it’d be neat to dig up how many times these five dudes shook loose from dunks during the 2017-18 season.

All five of these guys are perimeter players, who generate their offense further from the basket. It’s not a surprise to see them put up smaller dunk totals. In fact, of the 22 players in the ACC that recorded 20 or more dunks, only one was shorter than 6-foot-8. That would be Florida State’s Terance Mann. We’ve discussed Mann in this space before: for a wing, he’s wildly effective around the basket.

Josh Okogie: Puts on a show

Okogie stood out in more than one physical category, though. Amongst the guards at the event, Okogie was one of four players to measure with a wingspan of at least seven feet. The Yellow Jackets also finished in the top three of both the shuttle run and the three-quarter sprint.

For a guy that’s working his way to first-round pick lock status, this is an important event. This is just a guess, but it’s only a matter of time before Okogie hires an agent in preparation of the draft.

If that’s the case, one would think that Georgia Tech is preparing for life without Josh Okogie next season. It may be a long season in Atlanta for the Yellow Jackets, regardless of what Okogie decides to do.