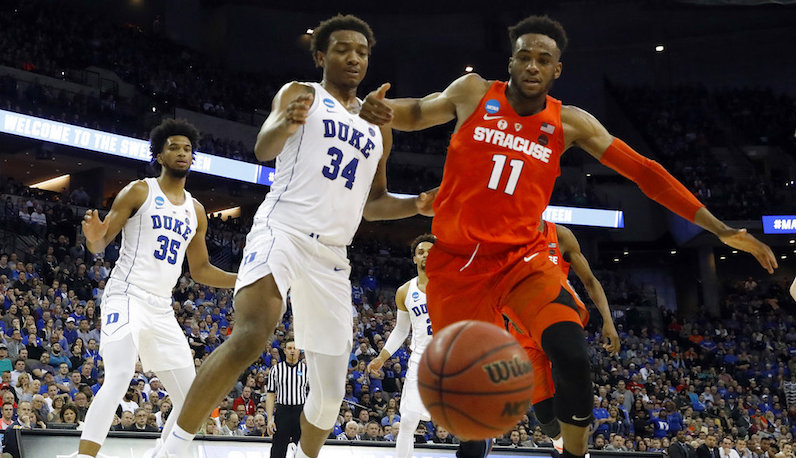 According to a report from Jeff Goodman, Syracuse sophomore forward Oshae Brissett will go through the pre-draft process for the 2019 NBA Draft. Brissett could still return to Syracuse for his junior season. Teammate Tyus Battle has already declared for the draft, too; however, he will not be back next season. Battle’s college career is over.

A season ago, both Brissett and Battle kicked the can on the idea of going pro; Battle even went through the combine process before deciding to withdraw on the deadline day.

In the 2018-19 season, both players were heavily featured in Syracuse’s offense. Battle led the team in scoring and usage — 17.2 points per game, 24.4 percent usage rate — while Brissett ranked third in scoring (12.4 points) and second in usage (23.5 percent).

Something to keep in mind with the Oshae Brissett news yesterday: Declaring for the NBA Draft no longer guarantees college basketball players leave https://t.co/Kn01Vk4uxk

Neither player was super efficient, especially Brissett, who finished the season with a 97.3 offensive rating (92.5 in ACC play), per KenPom. In over 1,110 minutes this season, Brissett handed out just 61 assists: 2.2 per 40 minutes. And after shooting just 27 percent on 3-pointers, he’s under 31 percent from deep for his career (277 3PA).

However, Brissett at 6-foot-8 and 210 pounds is long and rangy. He at least has the frame of an NBA wing. Inside the confines of Syracuse’s zone, he put up some decent blocks/steals numbers — 3.4 percent block rate — without fouling (2.5 fouls per 40 minutes) this season.

For more on Battle’s production — mostly an evolution from a spot-up player to a dribble-drive guy — check this out.

Louisville’s Jordan Nwora declares for the 2019 NBA Draft, could return to school