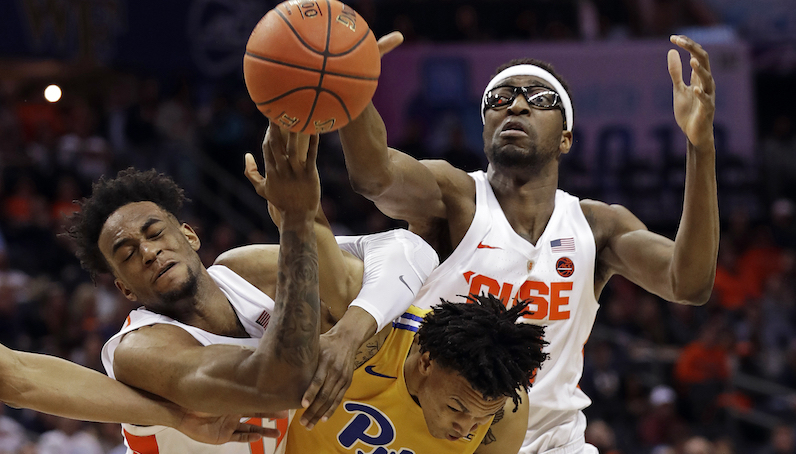 As it got set to open its NCAA Tournament schedule, Syracuse (20-13, 10-8 ACC) basketball landed some good news: All-ACC wing Tyus Battle, who missed the team’s two ACC Tournament games in Charlotte, will return for the Round of 64.

Now with its full roster of players ready to go, Syracuse can turn all of its attention to Baylor (19-13, 10-8 Big 12) — the team’s opening round foe from the Big 12. Here’s a couple things to know on the Bears before things get going late Friday night.

Hold your ground and Bear down

Once again, this Baylor team is excellent on the offensive glass; that’s a trend under coach Scott Drew. For the sixth straight season, Baylor ranks top 10 nationally in offensive rebound rate: 38.2 percent, No. 2 in Division I.

This could spell trouble for a Syracuse team that, from its zone, struggles to rebound the ball defensively. Without man-to-man assignments, the zone is vulnerable to offensive boards. In recent years at Syracuse, that trend has worsened, too. Currently, Syracuse has allowed opponents to rebound 33.3 percent of their misses — No. 335 in the country.

According to Synergy Sports, though, Baylor wasn’t super efficient on its put-back looks this; the Bears shot 58.8 percent on put-backs — good for No. 120 in the country. They did, however, score 221 total points on put-backs, which ranks 51st nationally, per Synergy. Volume over efficiency.

The last time we saw Syracuse on the court was in Charlotte against Duke and Zion Williamson. With Zion leading the way (seven offensive rebounds, 5-of-5 FGA on put-backs), Duke grabbed 13 offensive rebounds. That was nearly 42 percent of Duke’s missed field goals.

Baylor, of course, doesn’t have anyone close to Williamson in terms of talent; however, 6-foot-5 Mark Vital, a starter in all 32 games this season, ranks 23rd nationally with an offensive rebound rate of 14.4 percent. All three parts of Baylor’s center platoon — Mario Kegler, Freddie Gillespie and Flo Thamba (amazing name) — have offensive rebound rates above six percent.

Back in January, Baylor lost power forward Tristan Clark (knee), arguably the team’s best player, for the season. Clark was in the midst of an excellent sophomore season: 14.6 points (74.1 eFG%) and a 9.2 percent block rate.

After Clark’s injury, Baylor downsized some, and moved wing Jared Butler to the starting lineup. Butler’s started 15 straight games and shot 41 percent on 3-point attempts (12.9 points per game) over that stretch.

As a team, Baylor’s 3-point percentage — 34 percent — won’t amaze anyone. However, the Bears have some guys that can really let it fly from deep. Point guard Makai Mason, Devonte Bandoo, King McClure and Butler give Scott Drew four players with at least 100 3-point attempts — all shooting over at least 36 percent from downtown.

This combination of range shooting and handiwork on the offensive glass could be tough for Syracuse to stomach. Overextend on 3-point shooters, and you could leave yourself even more vulnerable at the rim for rebounds.

One last note: Syracuse and Baylor are two of the better shot-blocking teams in the country. Similar to Syracuse, too, Baylor plays a decent amount of zone — albeit one different from the team in orange.

Does Syracuse have any NBA Draft prospects on its roster?