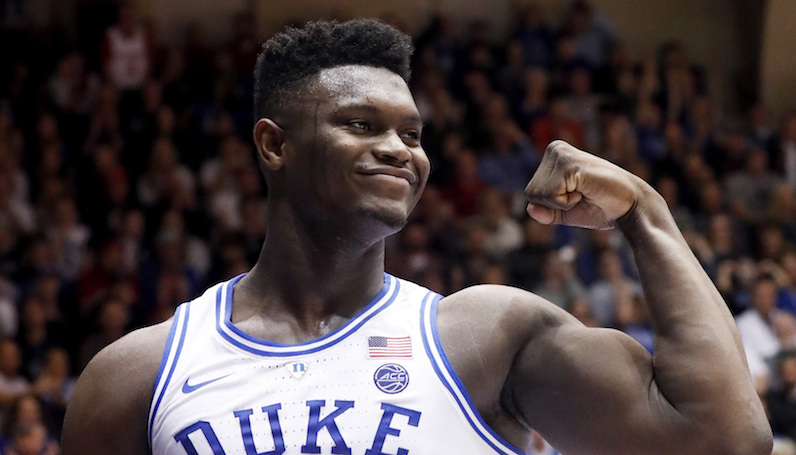 Duke's Zion Williamson (1) celebrates after he scored against North Carolina State during the second half of an NCAA college basketball game in Durham, N.C., Saturday, Feb. 16, 2019. (AP Photo/Chris Seward)

Here’s a look at the postseason ACC Men’s Basketball awards from ACC Analytics Page at ACCSports.com. Naturally, there’s overlap with our All-ACC roster, which were released on Sunday (March 10). For some of those player explanations, check out that post, which features additional stats, videos and historical information. (Additional links for that post are embedded below, too.)

Last week, there seemed to be some noise about Zion Williamson’s status for ACC Player of the Year after he missed, essentially, six games with a mild knee sprain. Stop, just stop. Hopefully that was mostly just bluster on Twitter; Zion is the obvious choice.

Outside of the people who live within walking distance to a Bodo’s Bagels, you won’t find a bigger De’Andre Hunter stan than me. I love him as a college player and an NBA prospect. (Last April, I even wrote why I thought he had a chance to be the league’s Player of the Year and Defensive Player of the Year, too.) And if you vote for him, I don’t think it’s a dereliction of duty. However, there’s no need to overthink this.

Very good, but not Zion

Hey, do you guys remember when Zion Williamson hit his head on the backboard while successfully blocking a shot? It was insane. This game — a mid-December win over Princeton, from less than 100 days ago — feels like it occurred in a previous life. Regardless, it’s important to remember just how uncommonly good Zion Williamson is at basketball.

Again: Sorry, you are very good, but not Zion

Just kidding. Although if he were eligible, he’d probably get my support here, too.

It didn’t take long for Virginia basketball to turn the page from UMBC loss, right? I care far less about the humility Bennett displayed after last season’s historical postseason collapse than I do about how this program has held together. It’s airtight. That type of defeat could’ve torn a program apart — fractured it, ruined it, caused divisions amongst the team. Nope. Instead, UVA returned stronger.

Virginia sits at 28-2, with the only two defeats coming against Duke and Zion Williamson. The Cavaliers also lead the nation in adjusted efficiency margin, per KenPom, as the only team to rank inside the top five of both offensive and defensive efficiency. After another ACC regular season title, Virginia currently projects as the No. 1 overall seed headed into the NCAA Tournament.

This team has a lot of good players, no doubt, but Tony Bennett and his staff deserve serious recognition, too. It’s not just wins and losses and point differential, though that stuff is important; this program has shown the ability to make adjustments — on both macro and micro levels.

Bennett altered the team’s offense this season, featuring more continuity ball screens and spread pick-and-roll — along with isolations for his star, De’Andre Hunter. That diversification has helped create the best offense of Bennett’s coaching career — going back to his time at Washington State.

He may not be Brad Stevens, but Bennett’s clever in-game adjustments after timeouts and halftimes have proven effective, too.

Tony Bennett is a good basketball coach. UVA's first play ATO/UNC turnover. Looks like they're loading up for their go-to elevator door play, you can see Kenny Williams turn his head. Then Kyle Guy zips in the opposite direction off Huff's screen to the strong corner. pic.twitter.com/y9R7q0qzNX

From a player-development perspective, every rotation player has taken a step forward this season (with maybe the exception of Jack Salt), including the Big 3: Hunter, Kyle Guy and Ty Jerome. However, that also extends down to Mamadi Diakite and Jay Huff, too. One could make a case this is the most impressive part of Bennett’s program: it’s ability to develop and create NBA role players.

This team defends (No. 2 in adjusted defense), avoids mistakes (14.8 percent turnover rate, No. 14 in the nation) and shares the ball (56.7 percent assist rate). And really, this is all just more of the same of the same for Bennett and Virginia, which is in the midst of a special stretch of basketball.

I think you can build a case for 4-5 coaches to win this award this year; however, for my money, Bennett gets my vote.

Yeah, allow me to get on my soapbox here for a second. It’s kind of silly that Mike Krzyzewski hasn’t won this award since 2000. Think about this: the last time Coach K won ACC Coach of the Year, Zion Williamson wasn’t even alive. Since then, Duke has won three national championships and nine ACC titles.

Roy Williams has been named ACC Coach of the Year just twice — and not since 2011. That, too, is a little absurd.

Of course there are lot of a great coaches in the league; the competition is always stiff. Context is important, too. However, this award — given out by the media — tends to go to the coach who has expected preseason expectations — also cultivated by the media.

So, by undervaluing said team in October, we leave ourselves at risk for overvaluing the performance of that team during the season. It’s incredibly reductive and results-based, but since we don’t know how to properly assess how or why a team performs a certain way, we just assign credit (or blame) to the coach. (If Louisville didn’t crater in the month of February, Chris Mack would be a shoe-in for this award — believe that.)

ESPN College Basketball analyst Seth Greenberg has been named ACC Coach of the Year as many times as Roy Williams. Two seasons ago, Georgia Tech finished two games below .500 in league play, and Josh Pastner won the award. Like, what exactly are we doing here? Hear me out: maybe — just maybe — we need to rethink how would give out this honor.

For the numbers on why Zion Williamson is unquestionably the ACC’s Defensive Player of the Year, check out the link below. And below that, enjoy once more one of the best highlights from the college basketball season.

It’s kinda wild, too, that Williamson — who blocked a lot of different dudes this season — had two of his most emphatic rejections against Hunter. On re-watch of these two plays, I’m just not sure how much Hunter could’ve done differently. Obviously, the block in Charlottesville could’ve been avoided with a pump fake (or a faster release, I suppose); however, it doesn’t seem like Zion should be able to cover that much space — mostly in the air.

And on this one, from a few weeks earlier in Durham, Williamson comes from out of nowhere to surprise Hunter.

Again: Very good, but not Zion (I apologize, Dre)

I actually think you can make a case for guys like Ty Jerome D,e’Andre Hunter, Nickeil Alexander-Walker, Kerry Blackshear Jr., and Cameron Johnson as candidates for this award. But those guys were pretty darn good a season ago, too, and played prominent roles on a very good teams. Let’s go a little more off the radar for this year’s winner and runner-up.

Chris Mack entered his first season at Louisville with plenty intrigue surrounding the program. As Mack and his staff worked to slap together a competitive basketball roster, it shouldn’t have taken a basketball genius to know: hey, this Jordan Nwora guy is pretty good.

In a limited sample — 336 minutes, 57 3-point attempts — the 6-foot-8 Nwora flashed some efficient offensive skills as a freshman: 1.25 points per possession (65.6 eFG%) on spot-up, according to Synergy. There were reasons to be optimistic as the 2018-19 season opened.

On offense, Nwora became Louisville’s featured player: 26.4 percent usage rate, a top-10 number in the ACC. With that, Nwora saw his scoring average increase by nearly 12 points per game — 17.3, good for fifth in the ACC.

Starting with his ability to launch from deep (7.7 3PA per 40 minutes), Nwora’s primary function is to score, and score a lot (1.7 assists per 40 minutes). However, while he will need to improve his on-ball defense, Nwora offers additional utility on the glass: 9.5 rebounds per 40 minutes.

Similar to Nwora, it didn’t take a rocket scientist to predict that John Mooney would have a big season. During his sophomore year in 2017-18, Mooney had a nice season in terms of points per possession (1.04 ppp) — mostly on spot-up looks (1.25 points per possession). With increased playing time, his box score stats were certain to jump.

Sixth Man of the Year

It was obvious last season; even in Florida State’s crowded frontcourt, Mfiondu Kabengele had serious offensive skills; it’s why I was so bullish on him heading into this season. If Leonard Hamilton gave this dude more playing time, his counting stats would balloon. Well, he’s done just that — while also flashing increased efficiency, too.

Truth be told, Kabengele locked this award up over a month ago. At 13.1 points and 5.7 rebounds (in less than 21 minutes per game), he’s a wonderful bench player — a super-sized microwave scorer.

Kabengele knows how to score; it’s as simple as that. He has a brutish post-up game — as he seeks out contact. According to Synergy, Kabengele drew a shooting foul on 20.4 percent on his post-up possessions. Overall, he drew 7.1 fouls per 40 minutes this season — No. 12 in Division I.

Part of Kabengele’s appeal: his ability to hit from range. He averaged three 3-point attempts per 40 minutes this season and hit on 34.7 percent of those bombs (17-of49 3PA). He doesn’t need all day and an acre of space to get the shot off (58.6 eFG% on catch-and-shoots), too.

A monster on the offensive glass, Kabengele grabbed 11.7 percent of Florida State’s misses while on the floor this season, which ranks 125th nationally. Those looks turn into instant offense — as Kabengele shot 73.2 percent and scored 1.39 points per possession on put-back attempts (No. 9 nationally, minimum 50 possessions).

Again, there should be little debate for this award; however, tip of the cap to NC State’s DJ Funderburk, who brought excellent frontcourt production to the Wolfpack.