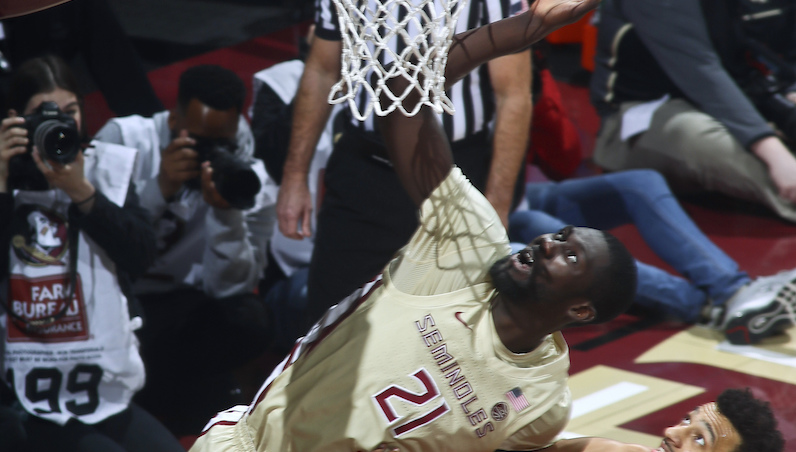 Wake Forest basketball continues to struggle on the road (now 4-38 in ACC road games under Danny Manning). After eight days off, Wake Forest traveled south for a matchup with Florida State. It didn’t go well. FSU scored over 1.3 points per possession, splashed 10 3-pointers and lit up the rim with 14 dunks. Yes, you read that correctly. (FSU also made 10 3-pointers; this was Wake’s worst defensive performance of the season, per KenPom.)

In the win over Wake Forest, Florida State made 35 field goals — 14 of which were dunks. Of course, 7-foot-4 Christ Koumadje — 5.4 dunks per 40 minutes — led the way. The onslaught started with a dunk by Koumadjue on the first play of the game, too.

Florida State had 14 dunks tonight vs. Wake Forest, including 8 from Christ Koumadje (who now leads the ACC with 52). Wake has 28 dunks all season.

(Wake Forest missed both dunk attempts in this game, including a miss from Jaylen Hoard over Koumadje.)

Defense has long been an issue for Wake Forest under Danny Manning; however, this year’s crew may take the cake (that no one wants). According to KenPom, Wake Forest ranks 218th in adjusted defensive efficiency (106 points per 100); this is on pace to be the worst defense at Wake since Jeff Bzdelik’s second season.

Currently, opponents are shooting 54.5 percent on 2-point attempts (No. 310) and have posted an effective shooting clip of 52.6 (No. 258). These are massive numbers and have the chance to be historic for all of the wrong reasons.

Florida State bludgeoned Wake Forest at the rim — a serious problem area for the Demon Deacons. And it was all way too easy; so much of this destruction came off simple post-ups or drop-off passes from easy dribble-drives.

Against Wake Forest, opponents have shot 60.8 percent in the half court around the rim, scoring 1.27 points per possession — No. 342 in the nation, per Synergy Sports. Nine of the dunk occurred in the second half, when Florida State hung 50 points on Wake.

Koumadje wasn’t alone, though. Terance Mann, a dynamic rim finisher at the rim, spiked two dunks. Once again, Mfiondu Kabengele — one of the country’s top bench scorers — shined in a reserve role and threw down three more dunks. That puts Koumadje and Kabengele is some cool company.

Most dunks by a pair of ACC teammates this season:

Seminoles check in at No. 6 in this week’s power rankings