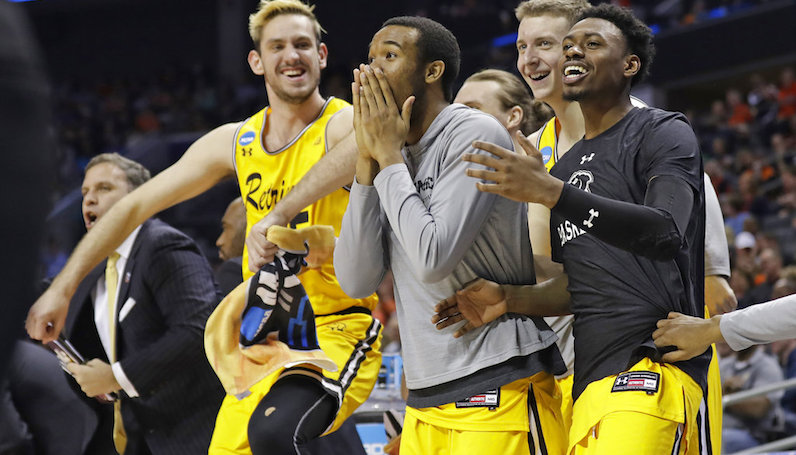 UMBC players celebrate a teammate's basket against Virginia during the second half of a first-round game in the NCAA men's college basketball tournament in Charlotte, N.C., Friday, March 16, 2018. (AP Photo/Gerry Broome)

I can’t believe I’m about to type this: For the first time in college basketball history a No. 16 seed has upset a No. 1 seed. Virginia Basketball falls to UMBC, 74-54.

Apologies for the editorialization, but this truly is unbelievable.

Virginia entered the tournament as the top overall seed; the Cavaliers finish the season 31-3. The last time this played, UVA cut down nets up in Brooklyn. Less than a week later: history. Life comes at you fast, and it can be wildly cruel.

Virginia played without star forward De’Andre Hunter, who is out with a broken wrist. His absence was clearly felt.

After a quiet first half, Kyle Guy finished with 15 points on 7-of-11 shooting; however, he was the only UVA player to finish with a strong game. Devon Hall was 1-of-9 (2 points); Ty Jerome missed 10 field goal attempts.

On the other side of the floor, Jairus Lyles was historically good for the Retrievers. Lyles scored 28 points on 11 field goal attempts, which sounds like a riddle. As a team, UMBC went 26-of-48 (54.1 percent) from the floor — 74 points on 48 attempts is wildly efficient.