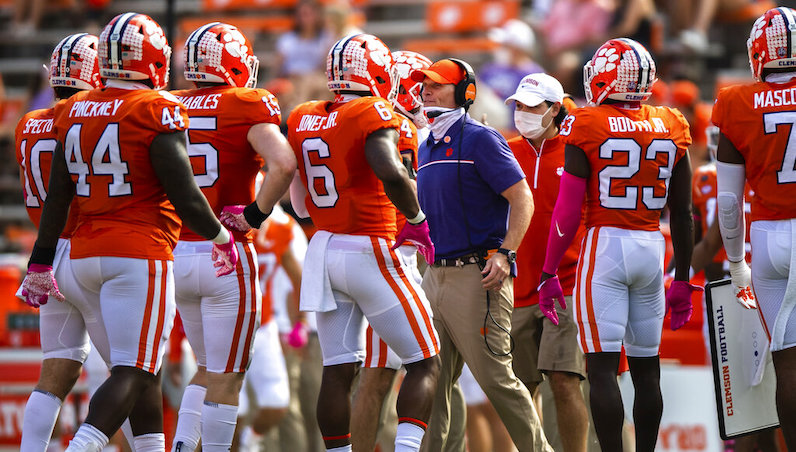 Could the top assistant coach in the ACC be headed elsewhere? Clemson’s Brent Venables is a priority candidate for the vacant Oklahoma job.

With Lincoln Riley leaving Norman for the USC opening, the Sooners need a new head coach. Oklahoma is one of the top coaching opportunities in the country; there’s money to spend and an imperative to keep on winning. This means the Sooner will go looking for a big name. Venables would satisfy that demand.

Prior to the start of the 2021 season, Clemson gave Venables a bump in pay, which made him the highest-paid assistant in college football: $2.5 million annually. This came a few months after Venables was a candidate for the then-vacant Auburn head coaching position, too.

During his time at Clemson, Venables has helped mold the Tigers into one of the premier programs in terms of defensive football. It’s one thing to recruit 5-star talents; however, it’s another to develop players and successfully scheme. Venables has checked all of those boxes.

With his help, Clemson has won two nationally titles; the Tigers routinely rank inside the top 10 nationally in a variety of catch-all defensive metrics.

Prior to arriving in Death Valley, though, Venables coached at Oklahoma for 12 years (1999-2011). While at Oklahoma, Venables was an assistant for Bob Stoops — serving as the defensive coordinator and linebackers coach.

Now, Venables could be in line to replace Riley, the man who replaced Stoops. Venables turns 51 in three weeks. This would be a great opportunity, in many ways, and could be coming at the proverbial right time,

Of course, this would be a major blow for Clemson and Dabo. Obviously, as long as Clemson continues to recruit at a high level, this program will be awesome. Clemson will also spend to replace Venables, one way or the other.

However, Swinney has built this program under a specific paradigm. He serves as the program-builder and the face of Clemson Football. Under that notion, though, is Swinney’s willingness to delegate various responsibilities to his coordinators and assistant coaches.

Clemson has seen plenty of assistants get poached for other job, especially on the offensive side of the ball. This would be different, though. Venables is The Guy and Clemson’s base approach to football starts with a dominating defense.

The brain drain hasn’t hit Clemson yet; however, if Venables leaves for Oklahoma, and takes some staff with him, then the Tigers must work to rebuild.

According to ESPN’s Chris Low, Venables is now the top candidate for Oklahoma job; a deal could be finalized today, too. If hired by OU, Venables would target Ole Miss offensive coordinator Jeff Lebby to be his OC in Norman.