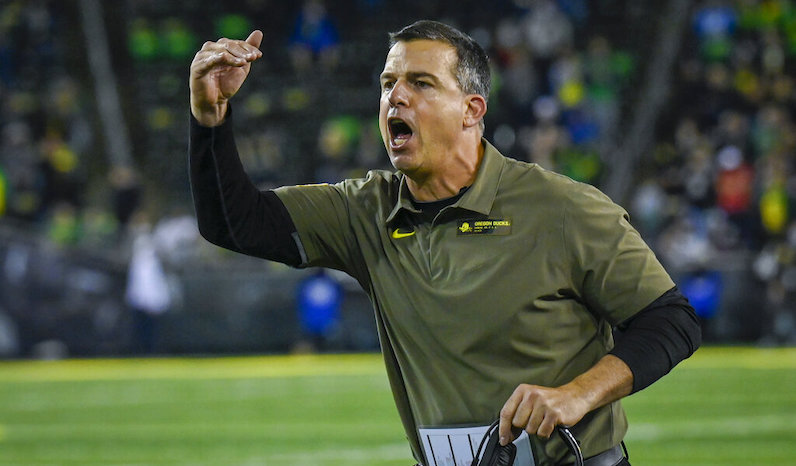 In what is quickly shaping up to be an absolute mess, Miami will reportedly target Oregon head coach Mario Cristobal in the coming days, according to Barry Jackson.

Of course, Miami technically still has an active head coach on its payroll: Manny Diaz. The Hurricanes are also operating, currently, without an athletic director; Blake James left last month.

Despite fact Miami doesn’t have a permanent AD, the Hurricanes will "make a run at (Oregon coach) Mario Cristobal in coming days,” @flasportsbuzz reports

The last two decades have been mostly unfruitful to the once powerful Miami program. Things, however, are quickly coming to an ugly collision.

Diaz, who spent most of the 2021 season on the hot seat, remains employed by Miami, for now.

After spending three seasons as Miami’s defensive coordinator (2016-18), Diaz replaced Mark Richt as the program’s head coach ahead of the 2019 season. In the three years with Diaz, Miami has gone 21-15; the Hurricanes are 0-2 in bowl games.

Was told the number of trustees is 68 and the same word was used "mess", by a person approached about the AD job.

Cristobal, the 2019 Pac-12 Coach of the Year, played college football at Miami (1989-92). A former offensive lineman, Cristobal returned to Miami in 1998 as a graduate assistant; he remained there until 2002.

After the 2017 season, Cristobal was promoted to head coach; he replaced Willie Taggart, who left to become Florida State’s head coach. With Cristobal as head coach, Oregon has gone 35-12 (.745). Cristobal has led the Ducks to a Rose Bowl appearance (2019) and a Fiesta Bowl (2020).

It remains unclear why Cristobal would want to leave a good gig at Oregon to join a process that’s currently unraveling in Coral Gables; however, Miami will take it chances, it seems. In most cases, obviously, money is the answer.

Cristobal makes $4.3 million annually as Oregon’s head coach — with another $700,000 in incentives. That incentives number could jump $1 million, though. Oregon, however, has reportedly come to Cristobal with a raise; this would take his annual salary up to $7 million.

According to reports, Miami has an offer that’s financially competitive with what Oregon’s willing to present.

Other reports suggest that this hiring process is yet to be finalized. Bruce Feldman of The Athletic notes that at least three different candidates are being considered for the position.

Am told that there are at least three candidates still in the mix for the Miami AD job, per source.

After 6 seasons at Virginia, Bronco Mendenhall will step down