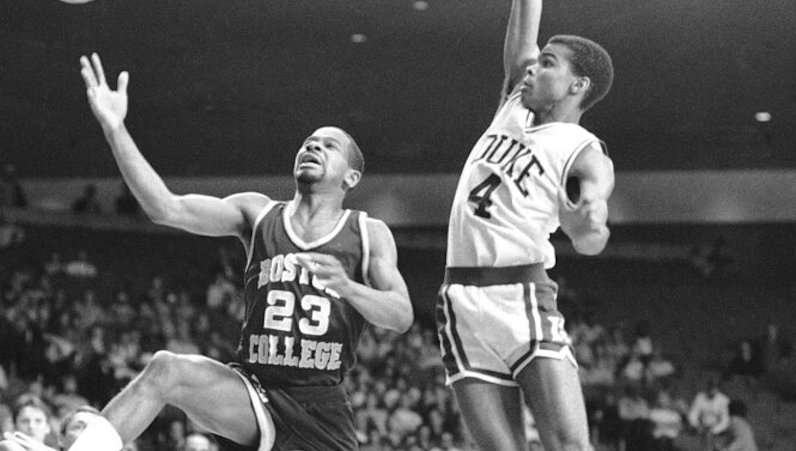 Boston College's Michael Adams (23) lost control of the ball as he made a flying try for a basket during the second half of the game at the Midwest Regional Tournament at Houston, Sunday, March 17, 1985. Duke University's Tommy Amaker (4) went up to guard the basket. (AP Photo)

According to a New York Post story about a book written by New York Post sports columnist Ian O’Connor, Duke coach Mike Krzyzewski pushed for Jon Scheyer to be his replacement, over former player and assistant coach Tommy Amamker.

O’Connor’s book notes that Duke went so far as to offer Amaker the job — before Coach K talked him about of the opportunity. That seems a little suspicious; it’s hard to imagine Duke actually offering a job without Krzyzewski at least signing off on it.

Regardless, O’Connor’s report claims that Krzyzewski held a Zoom call with Amaker last year. During the call, Krzyzewski reportedly told Amaker that if he left Harvard to become his successor-in-waiting for the 2021-22 season it would create an awkward relationship with Scheyer and force Duke to demote one of its current assistant coaces.

Last June, Scheyer was named Duke’s coach-in-waiting one day after Krzyzewski’s retirement. The transition would take place following the 2021-22 season. This set of circumstance would allow Coach K to coach his final season, while Scheyer, Nolan Smith and Chris Carrawell took over recruiting operations.

After the announcement, Duke star guard Wendell Moore Jr. spoke in support of Scheyer: “I was beyond excited. I know all of the great things he can and will do.”

So far, the arraignment has been a smashing success. Duke (21-4) ranks inside the top 10 nationally; the Blue Devils are unquestionably the best team in the ACC, too. When Krzyzewski was forced to miss Duke’s January win at Wake Forest (illness), Scheyer once again filled in as the team’s acting head coach.

Moreover, Duke signed the nation’s No. 1 recruiting class for 2022. Scheyer, Smith and Carrawell are the architects of a class that includes four top-15 prospects. The Blue Devils already have commitments from two top-30 prospects in the 2023 class, too.

Amaker, who played at Duke from 1983-87, was one of the program’s top players during the early Krzyzewski years. After his playing career, Amaker spent a decade as an assistant on Duke’s staff (1988-97); during that stretch, Duke won its first two NCAA Championships (1991 and 1992).

Neither Krzyzewski nor Amaker agreed to be interviewed for the article.