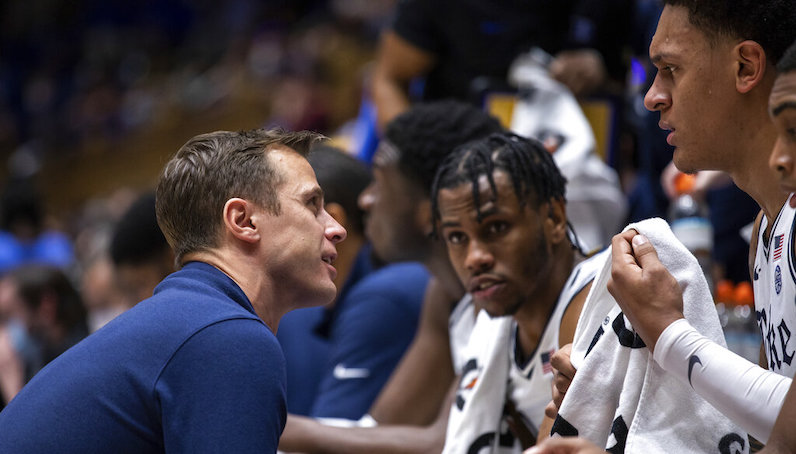 Things are trending up between Duke and Jared McCain, a blue-chip prospect in the 2023 recruiting class.

Over the years, Duke basketball has landed some important players from the state of California, including Cherokee Parks and DeMarcus Nelson. More recently, the Blue Devils landed 5-star post Marvin Bagley III in 2017 and 4-star swingman Cassius Stanley in the 2019 class.

Now, following an official visit to Durham, Duke is projected as the favorite to land the 5-star shooting guard from Corona (CA). Reporting from The Devil Den: Duke “hit a home run,” according to McCain.

Obviously, it’s early in the process; McCain will visit Gonzaga later this week. Closer to home, Mick Cronin and UCLA have a shot to land McCain, too. Houston, which McCain previously visited, is also in the mix.

However, McCain clearly enjoyed his team visiting Duke. The 6-foot-2 McCain ranks as the No. 2 shooting guard in the 2023 class, per 247 Sports.

Jon Scheyer, Nolan Smith and Chris Carrawell lead McCain’s recruitment; however, Mike Krzyzewski met with McCain during his trip, which seems to have made quite the impression, too.

Once again, this shows the strength of why Coach K, Scheyer and Duke went about the retirement/transition process. It’s rare to have this type of seismic shift atop a program, while maintaining continuity on the recruiting trail.

Currently, the Blue Devils have two 2023 commitments: 5-star point guard Caleb Foster and 4-star power forward Sean Stewart. The addition of McCain would give Duke three of the top 30 prospects in the 2023 class.

Foster and McCain could form one of the most dynamic incoming backcourts in 2023, too.

Beyond the Numbers: AJ Griffin playing like a top-5 draft pick