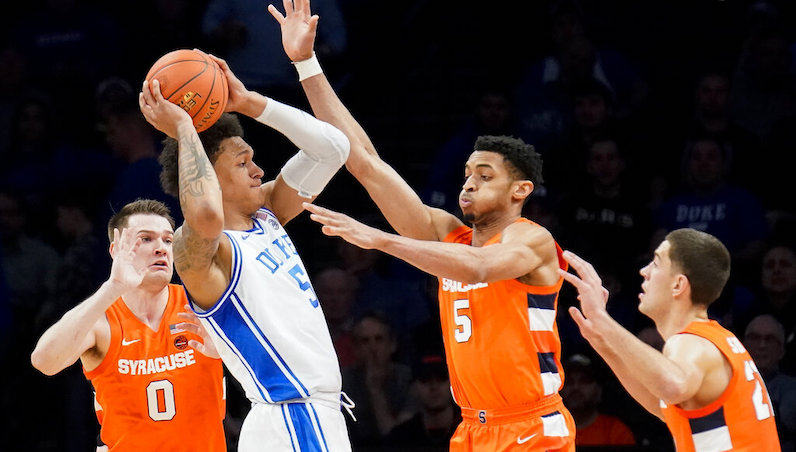 For the first half of the season, Anselem played mostly a marginal role off the bench. Jim Boeheim rarely dipped into his bench, in general; according to KenPom, less than 20 percent of Syracuse’s total minutes this season belonged to players who came off the bench, one of the lowest rates in the country.

However, when starting center Jesse Edwards, who was in the middle of a breakout season, was injured and lost for the year, Anselem took on a more prominent role, albeit one that centered on his ability to defend in the zone and rebound. Over the final 11 games of the season, Anselem averaged 22.9 minutes, 3.6 points, 6.7 rebounds and 1.2 blocks per contest.

Really nice adjustment from Syracuse to junk the game up vs. Duke with the Triangle-2, flipping back to the 2-3, and moving the target on defense. Triangle look zone up vs. Banchero at the nail, denied kick-out passes for AJ Griffin relo 3s https://t.co/H99JHY4mK9

Anselem was a late addition to Syracuse’s 2020 recruiting class; he didn’t commit to the Orange until June 2020, when he reclassified from 2021. Syracuse landed Anselem over offers from Georgia, San Diego State and New Mexico. LSU, Alabama and Arizona all offered Anselem, too.

With Anselem now in the portal, all three members of Syracuse’s 2020 recruiting class have transferred out of the program. Promising point guard prospect Kadary Richmond left in 2021 for Seton Hall. Around the same time, forward Woody Newton left for Oklahoma State.