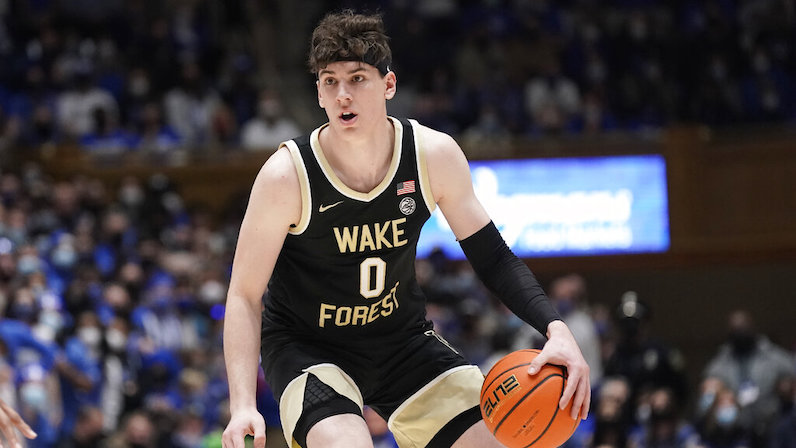 Jake LaRavia wasted no time establishing himself as a premier player in the ACC. Now, after one season at Wake Forest, after he transferred in from Indiana State, LaRavia will declare for the 2022 NBA Draft. The 6-foot-8 forward plans to maintain his college eligibility, too, thus keeping the door open for a return to Winston-Salem.

Those two changed the game and Winston-Salem and, more broadly, the paradigm for team-building in the era of the transfer portal.

LaRavia and Williams formed an incredible 1-2 punch as Wake Forest organized its offense around their abilities to make plays.

With Williams and LaRavia on the floor together this season (960 minutes) Wake Forest was +160 points, with a net rating of 12.3 points per 100 possessions, according to Pivot Analysis.

Following a 6-16 season, Wake Forest won 25 games — its most since the 2002-03 season — and narrowly missed the NCAA Tournament. The Demon Deacons won two NIT games before losing at Texas A&M, which marked Wake Forest’s first postseason runs since 2017.

Pick Your Spots: Jake LaRavia as an offensive fulcrum

With his size and handle, LaRavia is a matchup-destroyer. He plays with wonderful passing vision and awareness; LaRavia has the floor mapped. In terms of the ACC this season, LaRavia was the closest thing to Paolo Banchero: frontcourt playmakers that served as efficient hubs of offense.

Similar to Banchero, LaRavia is a technically-sound player. Whether in isolation or posted on the block, LaRavia attacks with purpose and precision. It may sound simple, but he’s strong with the basketball and can finish around the basket with either hand.

That’s one of the aspects of LaRavia’s game that’s most striking: he can create — score or pass — from every level of the floor.

As good as LaRavia was on offense, his defensive impact — while more subtle — was also rather impressive. LaRavia isn’t a dominant 1-on-1 lockdown defender; however, his work away from the basketball, as a team defender, is sensational.

He may lack high-end athleticism, but there’s something to be said about a defender that’s just constantly in the right place, time after time.

Jake LaRavia is just an excellent team defender. Rotates well on the back side of PnR, covers up other little breakdowns, meets the ball with quick hands and will look to make a play or just stay vertical on a contest

LaRavia is the second Wake Forest player to enter his name into the draft. Senior forward Isaiah Mucius will do the same, while also maintaining the option to return to school.

It’s wild to see how much LaRavia’s draft stock soared this season. Obviously, the same can be said for Alondes Williams, too. LaRavia isn’t a lock to land in the first round — if he stayed in the draft. However, that’s not out of the question, either. LaRavia could very easily slot in the back-third of the draft. All it takes is for the team that ends of with the No. 27 pick to fell in love and make a promise.

LaRavia could return to play for Wake Forest, which would instantly change the team’s outlook for next season. He’d provide Wake Forest with a foundational element, while returning as arguably the league’s top veteran player.

There’s risk in that, too: injuries, performance and projections. LaRavia is already three years out of high school and a little older for a prospect. That gets priced into this equation.

If LaRavia returned, he take on an even larger share of the offense; his per-game numbers would climb higher. That activity level — with the gravitational force of Williams — would draw extra defensive attention and force LaRavia to do more. It’s not easy to increase used and remain rigidly-efficient.