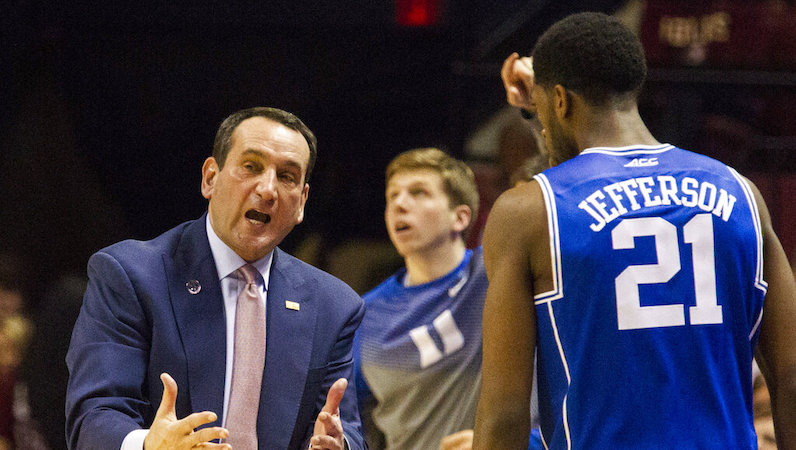 Duke head coach Mike Krzyzewski talks with Amile Jefferson as he comes off the court in the first half of an NCAA college basketball game against Florida State in Tallahassee, Fla., Monday, Feb. 9, 2015. (AP Photo/Mark Wallheiser)

It’s official: Amile Jefferson is the newest Assistant Coach for Duke men’s basketball. With some of the roles changing around the offseason, Duke promoted from within the program: Jefferson spent the 2021-22 season as Duke’s Director of Player Development.

Jon Scheyer, now the program’s Head Coach, added veteran coach Mike Schrage to his staff, too. Schrage, who spent the past three seasons as Elon’s head coach, has the official title of Special Assistant the Head Coach. In this role, Schrage will provide an “on-bench” presence to the staff.

Jefferson spent much of the last decade with Duke basketball. As a player, Jefferson participated in five years of action with the Blue Devils (2012-17), including a spot in the rotation on Duke’s 2015 national title team. During his playing days, Jefferson suited up in 150 games for the Blue Devils, scoring 1,079 points and grabbing 944 rebounds.

Jefferson enjoyed a professional playing career after Duke, too. After going undrafted in 2017, Jefferson spent time in the G-League and with the Orlando Magic. Jefferson played in a total of 30 NBA games.

Scheyer still has spots to fill with his staff. Currently, Chris Carrawell are the team’s assistant coaches, with Schrage serving in an altered capacity. This leaves one more assistant coach position open, along with Director of Player Development, which was Jefferson’s previous post.

Mgbako commits, Duke on pace for consecutive No. 1 recruiting classes