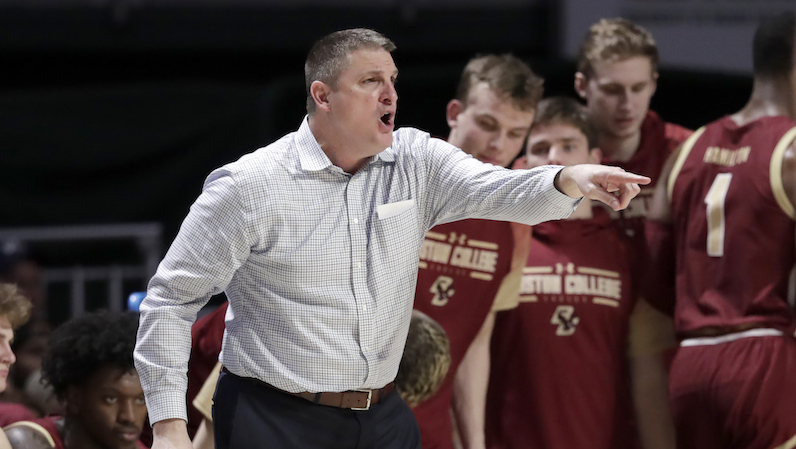 After seven seasons with Boston College, Jim Christian has been fired. Christian finishes his time at BC with a 78-132 record (.371); he never made the NCAA Tournament, and had just one postseason appearance with the Eagles (2018 NIT). Christian posted only one winning season at Boston College, too: the 2017-18 season, when the Eagles won 19 games with Jerome Robinson and Ky Bowman.

Sources: Boston College is parting ways with basketball coach Jim Christian. He ends his seven-year career there with a 78-132 record, 26-94 record in the ACC and no NCAA tournaments.

While the timing is a little peculiar — in the middle of the season — the 2020-21 season was likely Christian’s last — save for a major turnaround. When it was announced in March of 2020 that Christian would return to BC, most that decision’s rationale had to do with the soon-to-be raging COVID-19 pandemic.

At the time, then AD Martin Jarmond (who was hired by UCLA in May for the same position), said he wanted things to remain steady in terms of the basketball program’s top leadership position. In the end, Wake Forest was the only ACC men’s basketball program to part ways with its head coach during the pandemic.

Prior to the 2020-21 season, Christian loaded up on grad transfers to plug some key holes; however, save for an early-season win over Villanova, things never really clicked for Boston College. To pin all of that on Christian is unfair; the Eagles were hit hard by the virus. In recent games, BC has tried to compete without several scholarship players. Unsurprisingly, it hasn’t gone well.

Boston College currently stands 3-13 overall and 1-9 in the ACC. Assistant coach Scott Spinelli will take over on an interim basis.