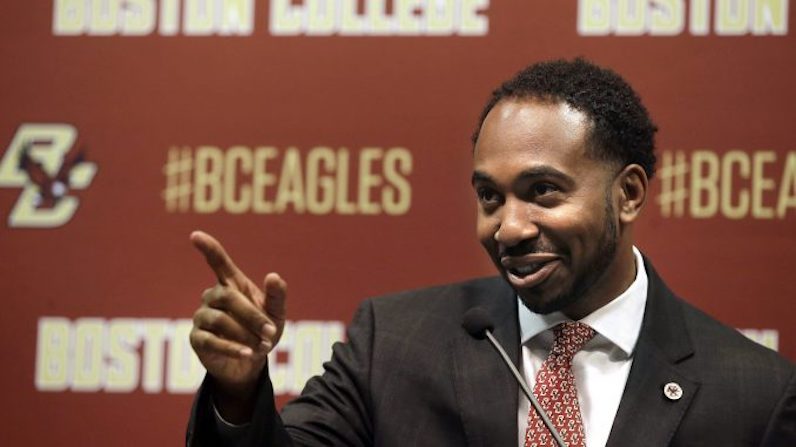 After three years with Boston College, Martin Jarmond will leave to become the AD at UCLA. (AP Photo/Steven Senne))

After days of speculation, Martin Jarmond agreed to leave Boston College and become the athletic director at UCLA.

This is a historic hiring for UCLA, too. Jarmond will become the university’s first African American athletic direction. On top of that, Jamond will also become the highest-paid AD in the Pac-12; his six-year contract will pay in $1.2 million in the first year and steadily rise from there. By the end of the deal, Jarmond is set to make $1.7 million annually.

Jarmond will replace Dan Guerrero, who will retire this summer after 18 years with UCLA. There were also reports that UCLA contacted Virginia athletic director Carla Williams; although a UVA spokesperson told them that “she had no interest, and no further conversations took place.”

According to Pete Thamel of Yahoo Sports, Boston College made a strong overture to retain Jarmond, who is credited with helping modernize BC’s athletic department. Jarmond, 39, became the youngest Power Five AD when BC hired him in 2017. Prior to that, Jarmond served for nearly a decade at Ohio State (2009-17).

At BC, Jarmond replaced Brad Bates (2012-17), who resigned in Feb. 2017 to work for the executive search and consulting firm Collegiate Sports Associates

During his time with BC, Jarmond was accessible to fans. He also helped launch a $150 million athletic department capital campaign. Jarmond, who played basketball for Jerry Wainwright at UNC Wilmington, gets credit for key hires in non-revenue sports: Joanna Bernabei-McNamee (women’s basketball, 2020 ACC Coach of the Year) and Jason Kennedy (volleyball).

And while BC elected to retain Jim Christian (hired by Bates in 2014) for a seventh season, Jarmond did make a major prove with the school’s football program. Last December, Jarmond hired former Ohio State defensive coordinator Jeff Hafley to become the program’s next head coach. Earlier in December, Steve Addazio (another Bates hire) was fired after seven seasons.

(It will be worth seeing how BC performs in men’s basketball next season. Christian has just one winning season with the Eagles and a sub-39 percent winning percentage. Another down year could force the plug to be pulled, which would pit whomever the new AD is with a major decision early in his or her tenure.)

Active on social media, and a strong fundraiser, Jamond will need to hit the ground running at UCLA. Even before the COVID-19 pandemic hit, the university’s athletic department was struggling financially.

This, of course, means Boston College is faced with the prospect of finding a replacement for Jamond, in the midst of a global pandemic. With a variety of challenges on the horizon, this will be no small task. Earlier Monday morning, BC Interruption floated the possibility of Dr. Patrick Kraft, Temple’s current AD.