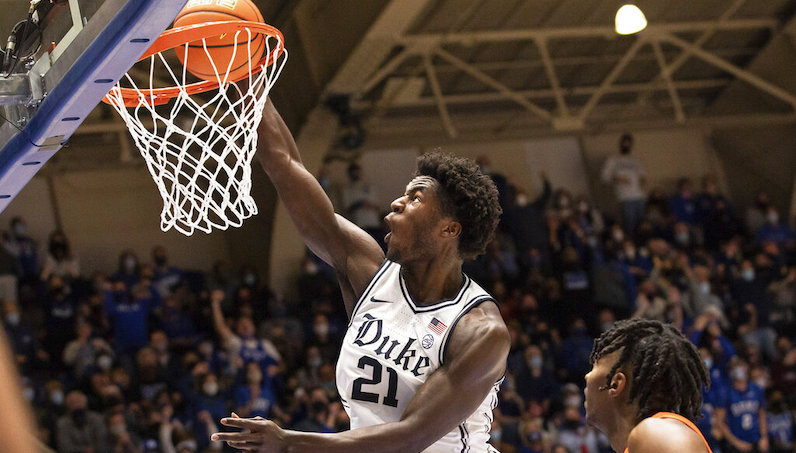 With the end-of-year holidays wrapping up, let’s jump right in on the ACC Power Rankings — starting with Duke and the emergence of stud freshman AJ Griffin.

As we’ve thoroughly covered on this website, AJ Griffin — when he’s right — is a star, one of the top prospects for the 2022 NBA Draft and the player that pushes Duke to being one of the country’s elite teams.

Recently, Griffin has shown a drive to get to the rim more frequently, which has coincided with him playing some of his best basketball in years. Since the two-week break for exams, Griffin has averaged 11.5 points per game, while playing 21 minutes per contest.

During that four-game stretch, Duke is +84 in 84 minutes with Griffin on the floor, according to Pivot Analysis. (Net rating: +57.3 points per 100 possessions)

The Virginia Tech marked another flashbulb moment/game for Griffin. The freshman wing was everywhere, while playing a career-high 24 minutes: 13 points, 4-of-4 2-points attempts, four rebounds, one block, one steal and one assist.

While matching up with the Hokies, the Blue Devils deployed one of the most killer small-ball lineups available: Griffin, Paolo Banchero, Wendell Moore Jr., Trevor Keels and Jeremy Roach. This is a lineup we’ve called for since the start of the season; however, that group played a season-high 16 minutes vs. Virginia Tech and swung the game.

After missing the last two games, Jake LaRavia is set to return when Wake Forest resumes its conference schedule this week vs. Louisville.

That’s huge news for the Demon Deacons. According to Pivot Analysis, when LaRavia has shared the floor with ACC Player of the Year Candidate Alondes Williams, Wake Forest is +115 in 272 minutes.

The Deacs have scored 118.1 points per 100 possessions with those two on the floor together.

Last week, I put together a deep dive on North Carolina: some of the new sets Hubert Davis has installed and the impact of floor-spacing transfer Brady Manek.

The Tar Heels continue to rank inside the top 20 nationally in both 3-point percentage and adjusted offensive efficiency, according to KenPom.

The Hokies haven’t won back-to-back games since late November; however, this is still a very capable team. Virginia Tech went toe-to-toe with Duke in Cameron, before the Blue Devils went heavy on a small-ball approach and ran away with the game in the second half.

Keve Aluma has scored 1.05 points per post-up possession this season (55.3 FG%), according to Synergy Sports, a top-20 number nationally (50+ possessions).

Aamir Simms is gone, but with the play of sophomore PJ Hall, Clemson still features a potent 5-out offense. The Tigers are tough to prepare for with Hall, a wonderfully technical low-box player.

The 6-foot-10 center can play with the ball in space, stretch the floor beyond the arc, facilitate from the elbows and punish teams in the post. Hall’s an inside-out threat — capable of scoring or passing from multiple levels of the floor.

However, there may not be a better hook shot in all of college hoops; Hall use positioning, footwork and touch with both hands to flick in seemingly tough, old-school buckets.

Once again, Leonard Hamilton has assembled a powerful, frenetic defense; Florida State is one of the top units in terms of the havoc numbers. FSU ranks top 20 nationally in both steal rate (14.3 percent) and block rate (16 percent).

The last time we saw Louisville on the floor — before the COVID pause — the Cards lost to Western Kentucky. During that game, Louisville saw up close just how impactful WKU’s 7-foot-5 center Jamarion Sharp can be.

Kentucky doesn’t have a player over 6’9pic.twitter.com/VnbTj3xKB3

Syracuse was off for 2+ weeks, which featured a COVID-19 pause of team-related activities. During the return to the floor, Buddy Boeheim splashed four 3-pointers and went for 28 points in a win over Brown.

There aren’t too many positives to take from Virginia’s 17-point home loss to Clemson; the offense continues to be a major concern. However, Reece Beekman did have his best offensive game of the season, which is encouraging.

Beekman got to the rim — including this nifty snake-back, inside-hand finish — hit three 3-pointers and finished with a career-best 20 points.

As usual, Beekman was a force defensively: three steals and a block.

Jordan Usher is one of the more intriguing second options in the ACC — working with lead guard Michael Devoe. Usher scored a career-high 30 points as Georgia Tech took down Georgia State.

Jordan Usher drops a career high and adds a double-double to lift Tech in a much-needed overtime win over Georgia State. pic.twitter.com/vf6o8Tawah

The Wolfpack have dropped three straight games, including an inexplicable home loss to Wright State. In each of those games, NC State’s defense allowed more than 1.09 points per possession.

In the middle of a tough season, John Hugley has been a force on the glass for the Panthers. Pittsburgh’s sophomore center is one of the top offensive rebounders in the ACC: 12.6 percent offensive rebound rate.