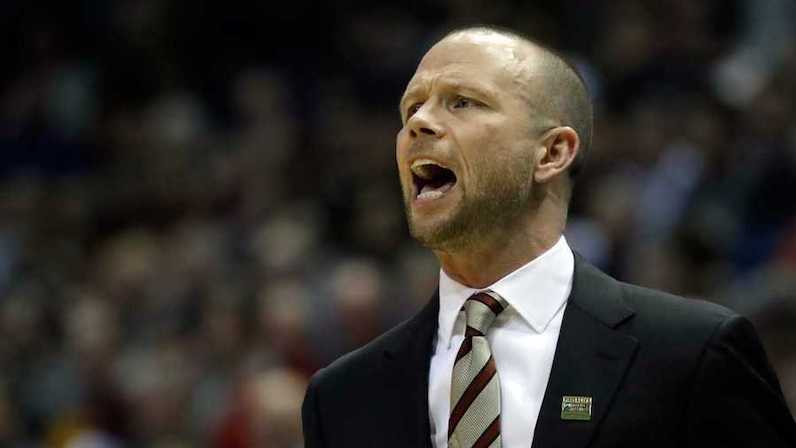 As Wake Forest moves on from the Danny Manning era, it’s time to start thinking about the next coach in Winston-Salem. There are several financial factors to consider, too. Manning’s buyout is a very real cost; college sports, in general, are suffering financially due to the impact of the COVID-19 pandemic. These are constraints.

With all of that in mind, here’s a look at a couple potential candidates to replace Manning at Wake Forest.

Miller, 37, was named head coach at UNC Greensboro in 2011. After a few seasons of rebuild, Miller has turned UNCG into an excellent mid-major program. Miller has a record of 164-126 (.566) during his nine seasons with the Spartans.

Over the last four seasons, though, UNCG has taken off. Going back to the 2016-17 season, the Spartans have won over 75 percent of their games (104-34). During that time, Greensboro dominated the Southern Conference, with a record of 57-15. In each of the last three seasons, the Spartans finished as top-100 KenPom team.

Miller led the Spartans to one NCAA Tournament — back in 2018, when UNCG nearly pulled off a first-round upset of Gonzaga.

Much of Miller’s success with UNCG has been built with defense. (This should speak to fans of Wake Forest, which slumped miserably on the defensive end of the floor under Manning.) The 2019-20 campaign marked the third straight season that UNCG finished the season with a top-75 defense in terms of adjusted efficiency. Isaiah Miller, one of the stars of those defenses, declared for the 2020 NBA Draft after his junior season.

Miller has connections in the state of North Carolina, too. He played for Roy Williams at UNC (2003-07, 93 games), and was a member of the 2005 NCAA Championship team. Since then, Miller has coached college basketball in the state of North Carolina. Before he became an assistant at UNCG in 2010, Miller was an assistant coach for Elon (2008-09) and High Point (2009-10).

This would be a homecoming. Kelsey, 44, spent most of the previous decade — across two different head coaches — at Wake Forest. First, he was the director of basketball operations (2001-04) for the start of the Skip Prosser era. (Kelsey also played for Prosser at Xavier in the mid-1990s.)

When current Louisville head coach Chris Mack left to become an assistant at Xavier in 2004, Kelsey was promoted to assistant coach at Wake Forest. After Prosser’s death in the summer of 2007, Kelsey stayed on as an assistant for the first two seasons of Dino Gaudio’s tenure as head coach (2007-09).

Kelsey left in 2009 to join Mack at Xavier, where he was named associate head coach (2009-12). After three seasons at his alma mater, Kelsey then took over the Winthrop program in 2012. Under his direction, the Eagles re-emerged as a player in the Big South. (Gregg Marshall built Winthrop into a power during his time in Rock Hill; however, the program backslid under Randy Peele.)

Kelsey is a notable branch on the Prosser coaching tree, which still has importance in Winston-Salem. More importantly, though, Kelsey is a darn good coach, too.

While at Winthrop, Kelsey has won nearly 64 percent of his games, including three regular season titles and two conference championships (2017 and 2020). In Nov. 2017, the same month Wake Forest infamously extended Manning’s contract, Winthrop signed Kelsey to a 5-year extension, too.

(Back in March of 2017, Kelsey briefly agreed to become the head coach at UMass. He even signed a contract. However, 30 minutes before his introductory press conference, Kelsey asked out of the deal and remained at Winthrop.)

Kelsey’s built teams that play fast, space the floor and shoot a lot of 3-pointers — perfect for the modern game. In each of the last five seasons, Winthrop ranked top 50 nationally in adjusted tempo, per KenPom. During that run, Winthrop never had a season with a 3-point attempt rate below 41 percent. During the 2018-19 season, 52.7 percent of Winthrop’s field goal attempts were 3-pointers (No. 5 in Division I).

This, too, would be a bit of a homecoming, albeit one with connections to a different era of Wake Forest basketball. Before he became the head coach at UC Irvine in 2010, Turner, 49, spent time as an assistant coach at Wake Forest (1994-00), working with Dave Odom. (As as basketball-obsessed kid growing up in Winston-Salem, I attended the Wake Forest basketball camp. I can vaguely remember when both Turner and Mack ran the day-to-day operations of the camp.)

Turner left Wake Forest to join Mike Montgomery’s staff at Stanford (2000-04). When Montgomery accepted the head coach position with the Golden State Warriors, Turner followed. Turner was an assistant coach with the Warriors until 2010; during that time (2004-10), he was also a part of Don Nelson’s staff.

Irvine has been quite successful under Turner: 209-139 (.601). With Turner, the Anteaters have won five regular season titles in the Big West. Turner’s run also includes two NCAA Tournament appearances: 2015 and 2019.

The 2018-19 season was Turner’s best in terms of on-court performance. That year, powered by a dominant interior defense (40.7 2P% for opponents), UC Irvine won 31 games and advanced to the second round of the NCAA Tournament.

What should’ve been a highlight, however, turned south, quickly. During Irvine’s second round game against Oregon, Turner referred to Ducks forward Louis King as “Queen,” which he admitted in a press conference after the game. Turner apologized for the homophobic language and, to his credit, went though a re-education process on the matter.

Other odds and ends

Wes Miller, Pat Kelsey and Russell Turner aren’t the only three names to consider, obviously. In the middle of March, there were rumors linking Penn State’s Pat Chambers to the Wake Forest job as well.

When ACCSports.com first reported the news — back in early March — of buyout negotiations between Manning’s agent and Wake Forest, the name John Beilein was of interest as a replacement, too.

Beilein, 67, is a program-builder — with success at Richmond, West Virginia and Michigan. Known for his efficient offenses, Beilein turned Michigan into a powerhouse program (nine NCAA Tournament bids over his 12 years in Ann Arbor, including trips to the national title game in 2013 and 2018), while also putting several players in the NBA.

At the conclusion of the 2018-19 season, however, Beilein left the Wolverines and agreed to become the next head coach of the Cleveland Cavaliers, with a lucrative five-year deal. Quickly, the partnership between the Cavaliers and Beilein turned sour, though. Amid in-season turmoil, Beilein resigned after coaching just 54 games. (Beilein’s salary could be a barrier to entry for Wake Forest, too.)

Regardless, it will be interesting to watch the hiring process, the first major one of John Currie’s tenure with Wake Forest, which will occur during a global pandemic.

After a hire is made, how will that coach look to construct a roster? In recent weeks, Wake Forest added commitments from graduate transfer Ian DuBose and Virginia Tech transfer Isaiah Wilkins, a denizen of Winston-Salem. Wake Forest currently has four players signed to its 2020 recruiting class, too.

Childress is obviously a Wake Forest legend and will be helping the program at least through the transition process.

Walters was only here one season, but has been a lot of fun to work with. Great basketball mind, and particularly helpful and giving of his time.