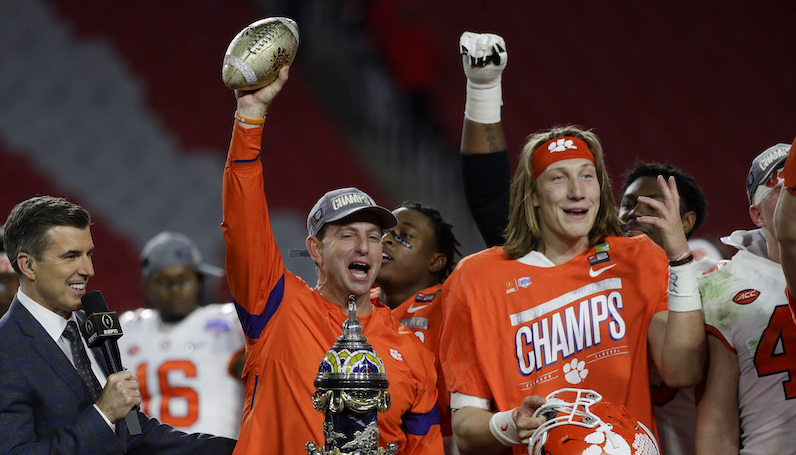 According to multiple media reports, it appears as though the most recent scheduling efforts for the 2020 college football season may prove to be null and void.

Earlier this week, the ACC announced its official 2020 schedule; however, concerns regarding COVID-19 permeate throughout the league — and the entire college football universe. On Saturday, the Mid-American Conference (MAC) canceled its 2020 season.

After an emergency meeting of the Power Five conference commissioners on Sunday, optimism for a 2020 fall sports season continued to plummet. In fact, despite some noble protests, it may be done.

Presidents of the Big Ten met on Saturday. According to ESPN, those school presidents emerged from the meeting with the desire to gauge interest from other Power Five commissioners, presidents and chancellors with regards to canceling the 2020 fall sports calendar, including football.

The report from ESPN notes that the majority of Big Ten presidents would prefer to postpone the 2020 season. Next spring has emerged as a possible timeframe and setting; however, those details remain murky, too. (This also begs the question: why did the Big Ten release a schedule earlier this week, then want to change course 96 hours later?)

They could all be moved up

Commissioners from Power 5 conferences met today, as ESPN has reported.

Prior to Sunday’s commissioners meeting, ACC officials were scheduled to meet on Wednesday this week. That’s now been moved up to Monday morning, per ESPN.

While there appears to be some movement for the Power Fives to reform as one united front, there are no guarantees. As we saw during the scheduling model fiasco, leagues may look to act and behave in their own self-interest.

If The Big Ten pulls the plug this week, will the SEC follow? I say no. https://t.co/lhcJ5gd8zA

Nearly a dozen ACC football players have already opted out of the 2020 season, including several high-profile talents: Caleb Farley, Gregory Rousseau and Jaylen Twyman. More would likely follow, too.

Other prominent players, like Clemson’s Trevor Lawrence and UNC quarterback Sam Howell, voiced their desire to play this season.

Several other corners of the collective college football world also spoke up in favor of playing in 2020. That, however, won’t factor into the decision-making process all that much.

Either way you lean, this is disheartening: the only way to get the best version of college football — now and in the future — comes with players having the ability to take part in these decisions.

We're at the stage where university presidents and lawyers are making the decision. There is no "let us play" appeal that's going to save anything.

This cuts both ways, too. Some players have opted out, yes. Others have voiced concerns without opting out, yet. Regardless, those athletes should have their voices heard as well.

All of this raises several rounds of questions, going forward: what will happen to football players (and other athletes) without a season? Will they be sent home, which includes potentially risky travel?

Players could be kept on campus, but what happens when other students arrive? What additional risks does that create? Scholarships will be preserved, but what about guarantees on extra years of eligibility? How realistic is a spring football season?

The COVID-19 pandemic has drastically and negatively impacted the lives of billions all over the world; the only way to be immune from its reach appears to if you’re a tech billionaire in America. (In which case, it’s a boom time for you, baby!) Going back to the middle of March, college sports have been crushed — starting with the loss of the NCAA Men’s and Women’s Basketball Tournaments.

Other professional domestic sports leagues — like the NWSL, NBA, WNBA and MLS — have been able to reconstruct or finish their seasons on the fly, by building bubbles. These operations function on a day-to-day basis, but so far, so good.

While it’s interesting to visualize a potential bubble concept for college football, the idea in a non-starter, unfortunately.

Reminder: Every CFB conference could build a bubble, but it would require admitting players are workers, and that would hurt the NCAA in court when it defends "amateurism." So instead, CFB's trying something that appears to be more dangerous and less likely to succeed https://t.co/QzcbTUtuOd

This is the same reason schools can’t have college football players remaining on campus — with quality healthcare resources — while other students stay away. If colleges did this, it would signify that the athletes are employees. And if the athletes are employees, well, then you’d have to pay them, or allow them to receive money. The NCAA simply can’t have this, especially as its in the process of petitioning the Supreme Court for help.

As the NCAA and some of its stakeholders cling to their antiquated business model, the opportunity costs of avoiding some of the more progressive (and necessary) updates to college sports are massive. (Although I suppose if this approach preserves “amateurism” in the long run, then all’s well that ends well, right?)

Universities and athletics departments will lose tens of millions of dollars; jobs will be terminated, across multiple sectors of the market. Budget cuts and furloughs have already slashed plenty of jobs, and that was before the weight of no football hit the picture. College towns and the small businesses that fuel those local economies will be devastated. Future recovery efforts could take years, in some cases.

This mirrors society at large, which is staring down a massive recovery effort, eventually. We can use the fraught state of the 2020 college football season to analyze any myriad of issues regarding amateurism, but ultimately this all reflects back on America. The country’s response to the pandemic — starting with an anemic effort from the federal government — has simply not been enough.

No matter the angle, the picture is grim, and it’s only getting worse.