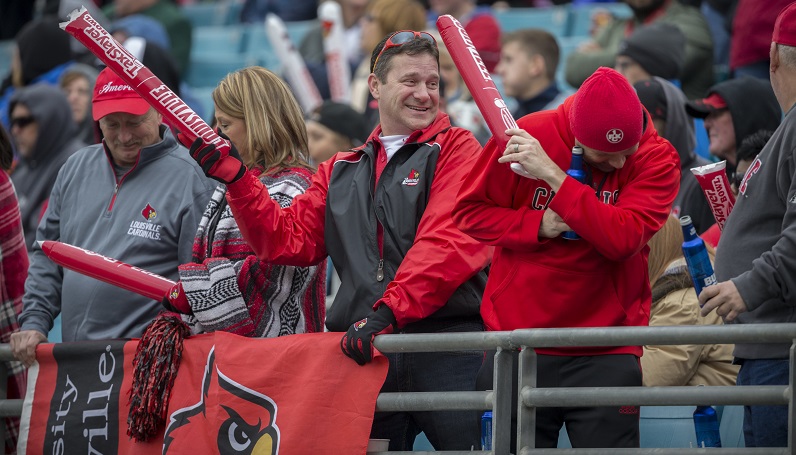 Two Louisville fans celebrate a play during the first half of the TaxSlayer Bowl NCAA college football game against Mississippi State, Saturday, Dec. 30, 2017, in Jacksonville, Fla. (AP Photo/Stephen B. Morton)

Vince Tyra, Louisville’s athletic director, announced that the university’s athletic department is set to face some harsh realities brought on from the coronavirus pandemic, including a 15 percent budget cut for sports. The staff furlough will be officially announced on Wednesday.

In a video teleconference on Monday, Tyra, however, didn’t specify details to the University of Louisville Athletic Association (ULAA) board.

These are obviously difficult times for college athletics across the country; add it to the list of industries that have been ravaged due to COVID-19. The loss of NCAA Tournament revenue was a serious blow.

The threat of an altered — or possibly cancelled — football season 2020 would have even greater harm, though. Tyra made note that a cancelled 2020 football season would cost Louisville roughly 45 percent of its athletics budget.

If there is no football season, #UofL will lose about 45 percent of its budget, athletic director Vince Tyra says. The worst-case scenario is around a $50 million dollar shortfall.

If there's no basketball, obviously the losses will be worse.

Louisville athletics already announced 10 percent pay cuts for head coaches and senior personnel earlier in April. According to Tyra, his department plans to trim $15 million from the 2020-21 athletics budget, which will be submitted this week.