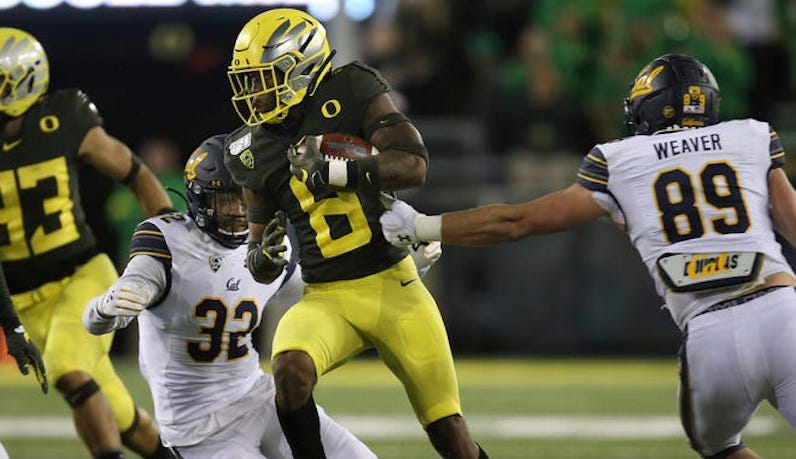 A group of Pac-12 football players are threatening to opt out of the 2020 season — preseason camp, games — until full negotiations with the conference over concerns with racial injustice and player safety amid the COVID-19 pandemic, among other demands.

This is a massive step for player/athlete empowerment, especially in the retrograde business model of college athletics. According to ESPN, football players from Oregon, Cal, Stanford and UCLA and other schools are all involved.

Unsurprisingly, Ramogi Huma, the founder of the National College Players Association, is helping assist the players in organizing the potential boycott, sources told ESPN. Huma, who played football at UCLA, has emerged in recent years as one of the most vocal and powerful advocates for the rights of college athletes.

The Pac-12 released a statement on Saturday that said the conference had yet to hear specific demands from the athletes.

On Sunday morning, however, the players issued their list of concerns and demands in a post on the Players Tribute — with the hashtag #WeAreUnited.

like i told you: the center of this moment in the pac-12 is racial justice. https://t.co/Mydna42xZD

For those who have stood in the way of progress and impeded improvements to the rights of college athletes, while defending the current system, this development must strike some fear. It’s one thing to swat down isolated protests; however, coordinated labor efforts like this have more teeth — not only to directly impact change but to also find other interested parties and groups.

(I’m guessing the group of SEC football players that expressed concerns over the league’s COVID-19 safety measures would be interested to read what Pac-12 players are demanding.)

The list of demands from Pac-12 players are four-pronged. The demands start with safety during the COVID-19 pandemic.

Additionally, the organized players want mandatory safety and health standards enforced by a select third party. This third party would help with more than concerns regarding COVID-19, though; the standards put in place would aid in cases of serious injury or abuse.

Secondly, the group aims to preserve all remaining varsity-level Pac-12 sports. Last month, Stanford — arguably the premier athletics department in the country — cut 11 different varsity sports. It felt like a seismic blow. This mirrors something we’ve seen across a variety of Division I athletics departments, though.

In the ACC, several coaches in men’s basketball and football — along with high-ranking athletics officials — take pay cuts amid over budgets cuts and staff furloughs. However, the Pac-12 group wants to go much further.

They are calling on Larry Scott, the Pac-12 Commissioner, along with coaches and administrators of the league to greatly reduce their pay to help save these non-revenue sports. The group also wants an end to performance and academic bonuses in the contacts of these coaches and executives.

Thirdly, though perhaps most prominently, the group of Pac-12 athletes wants to help end systemic racial injustice in college sports and society, at large. Here are their specific demands:

Under this fourth goal, the group wants medical insurance picked by the players for sports-related medical conditions — which includes possible COVID-19 illnesses. The players want this medical coverage to last for six more years of college athletics eligibility concludes.

As expected, the group wants the ability to secure representation and earn money from third parties based off the use of their name, image and likeness.

Finally, there’s a six-part list of demands for fair market pay, rights and freedoms. This includes six-year scholarships for student-athletes and a 50 percent revenue for conference athletes.

#Oregon star DB Jevon Holland: “We’re not your entertainment, we’re human beings… We don’t know the long term risks. We have no idea how it’s going to affect our body regardless if we show symptoms or not. I refuse to put my health at risk for somebody else’s benefit.” https://t.co/dDnq1hv6A1

Less than a week after the Pac-12 players gathered in numbers, a group of Big Ten athletes have followed suit. The group’s demands were published by The Players’ Tribune on Wednesday, several of which directly overlap with the list of concerns from the Pac-12 players.