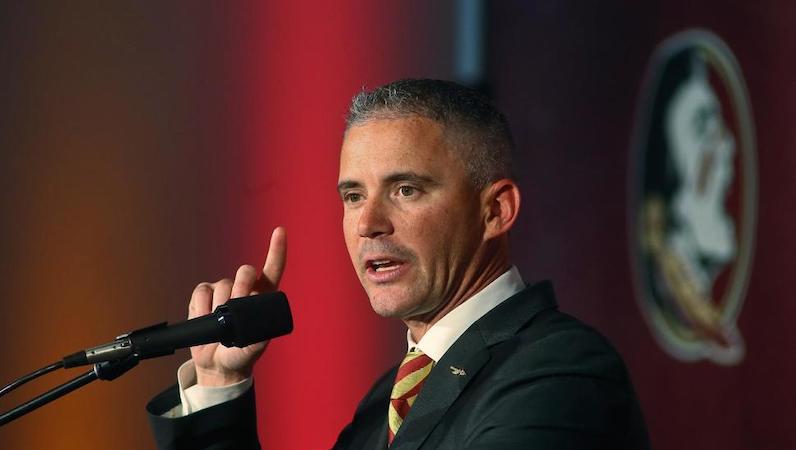 With Florida State’s athletic department set to cut its budget by 20 percent, Mike Norvell will take a 25 percent pay cut. These decisions come as the results of the COVID-19 pandemic.

Since taking over the FSU football program last December, a lot has happened in Norvell’s eight months in Tallahassee. Norvell helped build aspects of the program back up; FSU was incredibly active with high-level transfers this offseason. However, there have been plenty of complications, too.

The pandemic has placed considerable financial strain on the current business model of college athletics, which was already fraught with concerns. As a result, Florida State will eliminate 25 full-time positions in its athletics department; salary reductions would come to all remaining employees. Staff furloughs also loom as a possibility, too.

Athletic director David Coburn, who made these announcements in a letter last Friday, will also take a 20 percent pay cut. Coburn made these decisions based off projections for a fall sports schedule that features a lot of gloom and doom.

Unfortunately, these are just some of the harsh realities facing a country that has woefully failed to contain COVID-19 and has seen its economy spiral downward. (This is all made even more bleak by the fact that one of the few social/financial protections for American citizens — the CARES Act, which gives an extra $300-600 per week in unemployment — is set to expire at the end of July.)

College sports are one of the many industries crushed by these circumstances. Back in April, Louisville announced a 15 percent budget cut for its sports programs. If a 2020 football season doesn’t get off the ground, things will look even worse. Around the same time, Wake Forest’s Dave Clawson and John Currie also take pay cuts. Earlier this month, it was announced that Duke’s Mike Krzyzewski and David Cutcliffe will take pay cuts as well.