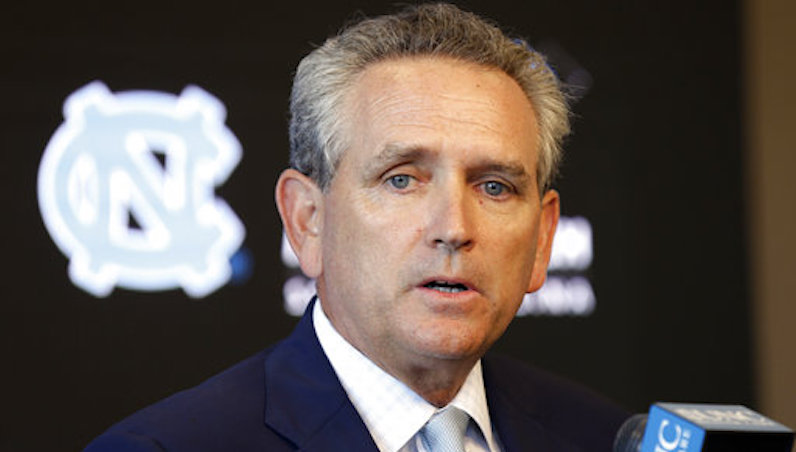 The financial dynamics of college athletics are on the verge of a shift; however, North Carolina athletics director Bubba Cunningham heeds caution.

Cunningham, who has been at UNC since 2011, told Dennis Dodd of CBS Sports that college sports risks becoming professionalized if new name, image and likeness legislation (NIL) measures are put into place. Back in April, the NCAA Board of Governors came out in support of changes to the amateur model of college sports, which would allow to be compensated for endorsement — with some stipulations, of course.

Dodd reached out to Cunningham after he wrote a letter to the Uniform Law Commission, which CBS obtained; in his letter, Cunningham made note of his concerns over these NIL developments from the NCAA’s Federal and State Legislation Working Group. Cunningham wrote:

Despite public pressure that has been exerted on NCAA leaders … we urge those involved in the ongoing legislative conversations not to abandon a model that has provided educational and athletic opportunities for hundreds of thousands of student-athletes.

The membership is further and further away from Indianapolis than we’ve ever been. What we do is end up accepting what comes our way and then trying to deal with it. That shouldn’t be the way it works.

After years of resisting federal intervention, the NCAA is in the process of seeking an antitrust exemption for NIL. This is a serious reversal from where things stood less than 12 months ago. All of this, however, is misguided, per Cunningham. UNC’s AD believes, if anything, Congress would prefer to hear from the schools and conferences.

As Dodd notes, Congress may not even have interest in helping the NCAA, following defeats in several prominent antitrust lawsuits. If NIL legislation isn’t put into place, more lawsuits will certainly be on the way.

Cunningham sees a delineation between what are professional sports and college sports; the line dividing those two items hinges on compensation and how that’s derived. Back in April, the NBA and the G League created a new development program designed for preps-to-pro players. Cunningham is in favor of this initiative, which has already had an impact on the (high school) class of 2020.

There are deadlines on horizon, too. On July 1, 2021, Florida’s NIL bill will take effect. The state of California has NIL rights coming, too, in 2023. Without some form of macro-level progress, more state-by-state initiatives could also be in the works.

UNC Athletics set to to return in stages