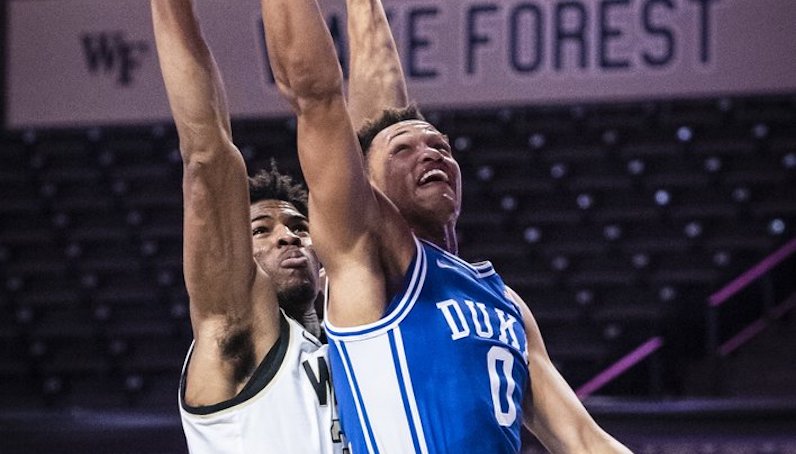 With Mark Williams officially back for his second season, Duke basketball has what’s shaping up to be an interesting two-deep roster. Of course, the Blue Devils will continue to work on landing one last 5-star in the 2021 recruiting class: 6-foot-9 sharpshooter Patrick Baldwin Jr. However, where things stand now, Duke should feel confident in this crew — despite high roster turnover, once again.

Of this group, four guys feel like absolute locks to start. The list is bookended by the two returnees from the 2020 class: Roach and Williams.

Roach will enter the 2021-22 season as one of the more interesting guards in the country. After a solid, yet up-and-down, rookie season, Duke needs Roach to take a step. There are other creators on the roster; however, if Duke’s pick-and-roll offense is to improve, Roach must be better as an engine of offense.

The headliners of this bunch, obviously, are Griffin and Banchero, the projected No. 1 pick in the 2022 NBA Draft. Banchero can basically do everything on the court; with his size and creation efforts, the Blue Devils will feature him prominently. Griffin is power wing and projects as a top-10 pick for 2022 as well.

The fifth and final spot is up for grabs, though. In terms of guys on the projected roster (so no Baldwin), this should come down to Keels and Wendell Moore Jr.

How far can the truth be stretched?

There’s one obvious concern here, though, despite the overwhelming NBA-level talent: this group feels a little light on shooting.

During the 2020-21 season, Duke wasn’t exactly a great 3-point shooting team. Even with a monster effort from Matthew Hurt (one of the best shooters in the country), the Blue Devils ranked outside the top 100 nationally in percentage (35.1 3P%) and attempt rate (38.7%).

Now, Duke transitions to the 2021-22 season without its top two 3-point shooters/stretch components — in both volume and efficiency: Hurt and DJ Steward.

As a freshman, Roach was mostly fine from deep: 31.5 3P%, 48.5% 3PA rate. His stroke is projectable; Roach should improve. It’s asking a lot to assume that Roach will turn into some pull-up bomber out of the pick-and-roll, but he posted an effective shooting rate of 52.6 eFG% this season, which is quite good.

After an absolute frigid start of the season (18.8 3P% through the first 8 games), Moore closed the year shooting the best ball of his career. Moore launched 4.5 3PA per 40 minutes vs. ACC opponents, and drilled 31% of those looks.

Of course, the trio of Keels, Griffin and Banchero will factor into this equation, too. The Blue Devils will need some baseline level of 3-point volume/efficiency from their star rookies.

Honestly, whomever shoots the ball better on spot-up looks between Keels and WMJ may determine the fifth starter/leverage minutes lineups. According to Synergy Sports, Moore posted a 45.1 eFG% on catch-and-shoot attempts this season.

What about the Baker Man?

Joey Baker could help these efforts, as the team’s designated movement shooter, especially when Duke gets to its floppy action. Baker profiles as legit catch-and-shoot threat. At 6-foot-6, Baker’s flashes as a wing shooter (36 3P% career) give Duke fans something to dream on. For now, though, most of this is theoretical; Baker tends to run hot-and-cold.

Baker emerged out the gates in a good rhythm during his sophomore season in 2019-20, but cooled down the stretch: 30.8 3P% in ACC play.

During his junior season, though, Baker never quite got right. In limited playing time, Baker posted a true shooting rate of 44.1% — a steep decline from the previous year (54.4 TS%).

Streaky tendencies aren’t the end of the world, although the numbers can look rough depending on how things are itemized. Chopping things up from year-to-year or non-conference play vs. conference play doesn’t always paint the most accurate picture of a player’s production.

The substitution leash can be awfully short, though, when there are shooting blips and other wings in the rotation fighting for playing time. Griffin, Keels and Moore are this team’s top wings.

That said, if Baker shoots a good ball next season, he will play minutes. Range shooting is a necessary skill to pair with Banchero and Williams.

Following the commitment of Keels in early April, Duke went to work on improving its bench depth. Duke’s staff wanted to add both ball-handling and frontcourt production. While the loss of Henry Coleman stings, including for non-basketball reasons, Marquette transfer Theo John is a veteran rim protector. He’s relatively athletic for a 5, too. During his career with Marquette (124 games), John posted an 8.4 percent block rate.

Jaylen Blakes was a late addition to the 2021 class; however, the 4-star point guard provides some depth behind Roach, while also offering long-term upside. It certainly doesn’t hurt to have another playmaker on the roster.

This is a good pickup. Getting good, long term PGs for blue bloods/OAD schools should be more prioritized. And Blakes has good upside w/ his speed, finishing and shooting projections. https://t.co/Nq3WcSUAy4

If Keels does become the starting 2 for Duke, there’s a very meaty bench role on the table for Moore. In fact, it’s one that he could really thrive in. While WMJ will likely get the nod to start the season — his experience matters in the eyes of the coaching staff — he could be a force for the Blue Devils as a reserve.

(With Hurt headed to the NBA Draft, Moore is now the final holdover from the 2019 recruiting class. He’s the only one of that group still with a chance to play in an NCAA Tournament game while at Duke.)

Since his arrival in Durham, Moore has been asked to play and defend all five positions. Moore provides Duke with a multitude of small-ball options (same with Griffin); while not an explosive vertical athlete (6 career dunks in 49 games), Moore has good size (6-foot-5, 216 pounds) and moves well. He can switch around and guard a variety of position types.

When he’s locked in terms of his team defense, Moore can be an event-creator. Moore’s steal rate jumped slightly to 2.5 percent this season.

On some nights, Moore has been a featured player on offense. Let’s never forget his absurd shot-making performance against Boston College this season: a career-high 25 points on 13 FGA.

In other games, though, Moore has functioned a lower-usage who can spot-up and provide secondary creation. During his sophomore season, Moore had eight multi-assist games with sub-20% usage.

The upshot: Moore’s biggest strength (outside of his rugged slashing skills) is his two-way versatility. As a sub, Moore could work as a replacement for whomever needed to come out of the game, including the 7-foot Williams. Moore could enter as hybrid/flex forward, while Banchero slides down the 5.

In this role, Moore could still play 25-30 minutes per contest and also close games, which matters most. Depending on how things are flowing offensively, WMJ could gauge how he wants to impact on that end.

Whether he starts or comes off the bench, Duke will look to unlock as more of Moore’s versatility as possible. It’s not like this hypothetical role is contingent upon his starter distinction. However, color me intrigued by the possibility of Moore using his ubiquitous skill set to turn into the top sixth man in the ACC.

Bart Torvik’s RosterCast and 2022 projection model is rather bullish on the Blue Devils. Currently, the system has Duke projected as the No. 7 team nationally in terms of adjusted efficiency, the best of any ACC team.

Duke projects as the No. 5 offense in the country, too.

Now, if you add Baldwin to the roster, Duke jumps up to No. 3 in Bart’s projection model. The offense improves by nearly three points per 100 possessions with Baldwin.

Baldwin may be a bit of a long-shot, at this point. However, Duke could pivot and look again to the transfer portal; there’s still plenty of talent remaining. As of right now, there’s plenty on this roster for a solid, defined rotation. If the Blue Devils want to add more pieces, though, there’s space available. (There’s also a bit of hole in the frontcourt rotation without Coleman, an excellent team defender.)

Duke wouldn’t be able to offer a starter-level or featured role to any player in the portal. But the staff could use this as an opportunity to beef up the frontcourt and/or add another shooter, which you simply can’t have enough of on any roster.

Read More on Duke Basketball and the ACC