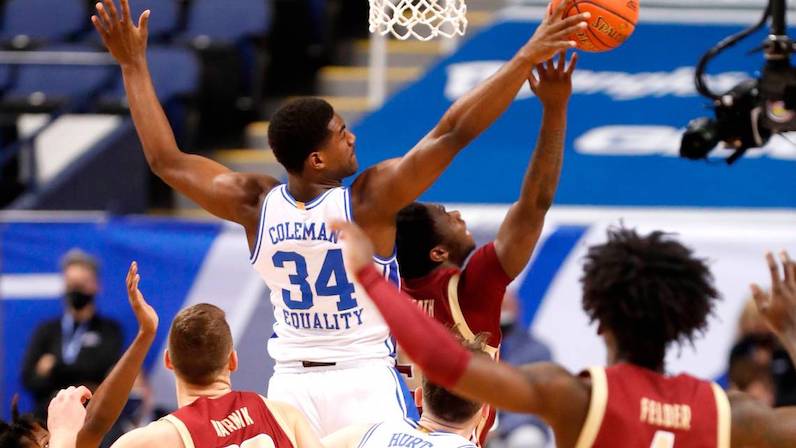 Duke’s Henry Coleman III (34) blocks the shot by Boston College’s Jay Heath (5) during the second half of Duke’s 86-51 victory over Boston College in the first round of the ACC Men’s Basketball Tournament in Greensboro, N.C., Tuesday, March 9, 2021. (Ethan Hyman/The News & Observer via AP, Pool)

During his freshman season, Coleman appeared in 19 games: 5.0 minutes per contest. In a deeper reserve role, the 6-foot-7 Coleman averaged 1.1 points and 1.4 rebounds per game. While Coleman never found a consistent role in a crowded frontcourt — even after the departure of Jalen Johnson — he flashed interesting two-way potential. Coleman is incredibly strong; he also has the ability to be a solid team defender.

A former top-50 prospect, Coleman posted a block rate of 6.6 percent this season.

With Coleman joining Jaemyn Brakefield in the transfer portal, Duke’s 2020 recruiting class is down to only two remaining players: point guard Jeremy Roach and center Mark Williams. DJ Steward joined Johnson with his decision to declare for the 2020 NBA Draft.

When Matthew Hurt declared for the draft, too, it seemed as though Coleman would have a role carved out behind Williams and incoming 5-star forward Paolo Banchero. Coleman could be a sub for either player and split time at the 4 and 5.