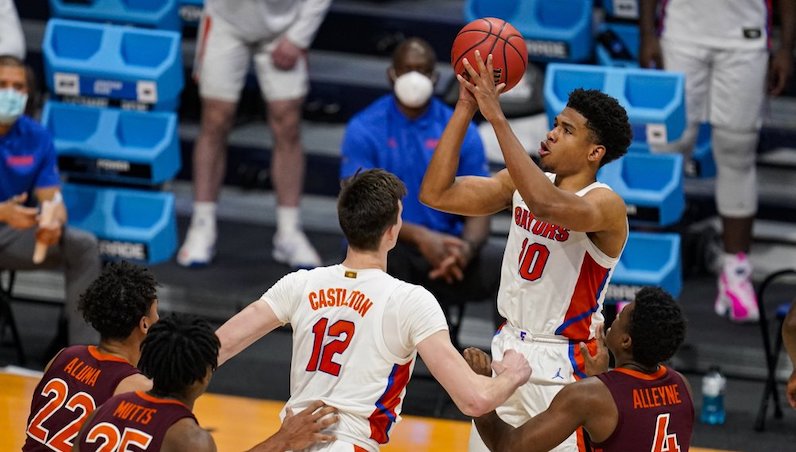 Florida guard Noah Locke (10) shoots against Virginia Tech in the second half of a first round game in the NCAA men's college basketball tournament at Hinkle Fieldhouse in Indianapolis, Friday, March 19, 2021. (AP Photo/Michael Conroy)

After three seasons at Florida, Noah Locke will head north to Louisville. Locke was one of the top perimeter shooters in the transfer portal.

One of the missing ingredients from Louisville’s roster this season was perimeter shooting. Chris Mack has addressed those concerns with several additions this offseason via the transfer portal.

First, Louisville landed a commitment from Miami transfer forward Matt Cross in February. Before Cross left the Miami program in late January, he showcased impressive movement shooting abilities. Cross moves well without the basketball; at 6-foot-7, he can create matchup concerns all over the floor.

Now, Noah Locke is in the mix as well. Locke averaged 10.6 points per game in each of the last two seasons with the Gators.

Of course, JUCO stud El Ellis is set to arrive next season, too.

Locke is a career 40-percent 3-point shooter; he isn’t afraid to let it fly, either. While appearing in 92 games at Florida (79 starts), over 68 percent of his field goal attempts came from beyond the arc: 12.5 3PA per 100 possessions.

Locke has big-time range, too.

According to Synergy Sports, Locke has connected on 40.3 percent of his career catch-and-shoot 3-point attempts. This is a wonderful blend of volume and efficiency as a long-range shooter.

He isn’t a spot-up statue, though. Locke can function as a movement shooter; this bodes well for Mack’s offense. Louisville missed Jordan Nwora and Ryan McMahon this season — two ace shooters that could run around and bend defenses with their off-ball patterns.

With Locke and Cross, especially, those parts of the playbook come back online now.

Up to this point of his career, Locke has been used primarily as a catch-and-shoot bomber. It hasn’t been his prerogative to put his head down and get to the rim from a live dribble. As a result, Locke rarely gets to the free throw line: 1.5 FTA per 40 minutes this season.

Locke wants to showcase more on-ball creation skills. Louisville should be able to accommodate that request, while also focusing Locke on what he does best: launch 3s.

During his time in Tallahassee, Locked played next to two skilled primary creators: Andrew Nembhard and Tre Mann (top 20 prospect in the 2021 NBA Draft), Locke mostly floated off ball. Locke could have the opportunity to play alongside another premier college point guard.

Carlik Jones will test the NBA Draft process while maintaining his eligibility; it remains to be seen what exactly David Johnson will do. Johnson is wildly talented, but he struggled over the back portion of Louisville’s schedule, which caused his draft stock to take a bit of a hit.

If Jones returns, the ball will obviously be in his hands a great deal. This time, though, with a more evenly spaced floor.

That could spell bad news for ACC defenses; Jones was the league’s premier pick-and-roll decision-maker this season. A starting backcourt of Jones-Ellis-Locke — with West as the fourth guard — would be really dangerous.

If Jones leaves for the pros, then West slides in as the starting point. The West-Ellis-Locke backcourt has enormous potential, too. Pair that trio with Cross, Malik Williams, Samuell Williamson, JJ Traynor, and Jae’Lyn Withers, one of the top rim finishers in the ACC, and Louisville has a roster that can contend.