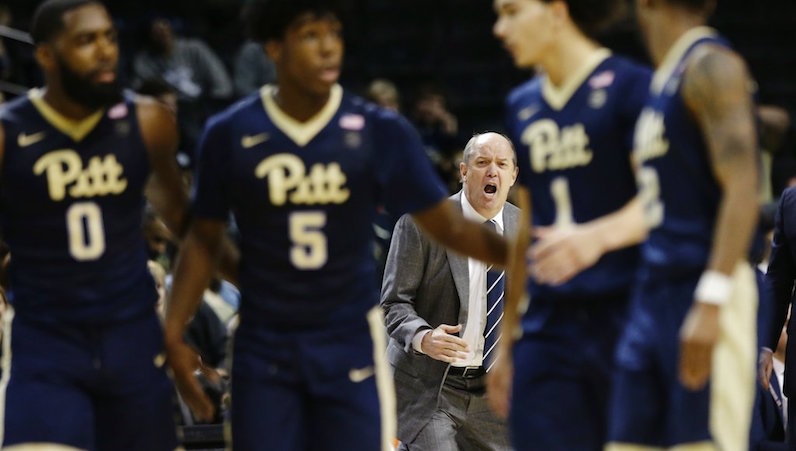 Pittsburgh head coach Kevin Stallings calls out to his players as Jared Wilson-Frame (0), Marcus Carr (5) and Parker Stewart (1) huddle with teammates during the second half of an NCAA college basketball game against Notre Dame in the first round of the Atlantic Coast Conference tournament Tuesday, March 6, 2018, in New York. Notre Dame won 67-64. (AP Photo/Frank Franklin II)

When it rains, it pours; although considering some of the recent weather, this forecast shouldn’t be all too surprising. However, perhaps there’s no need to rush out and buy a new raincoat just yet.

According to ESPN college basketball insider Jeff Goodman: On Friday, eight Pittsburgh basketball players will receiver a release to transfer elsewhere if they chose.

This news comes out a week after Kevin Stallings was let go of his head coaching duties.

Stewart, Brown, Carr and Stevenson are all promising freshmen for the Panthers; that quartet combined to score 1,021 of Pitt’s 1,985 points this season (54.1 percent). Stewart shot 42.5 percent on three-pointers in ACC play, too, which ranked 9th in the league.

An important note from Corey Evans — a college basketball analyst from Rivals. The players are simply doing their due diligence here.

Should remind Pitt fans, asking for a release to transfer does not mean it’s a definite that the player is leaving. Told majority will wait to see who the appropriate hire will be before a final decision is ultimately made

Ask the Experts: Why Pitt had to move on from Kevin Stallings