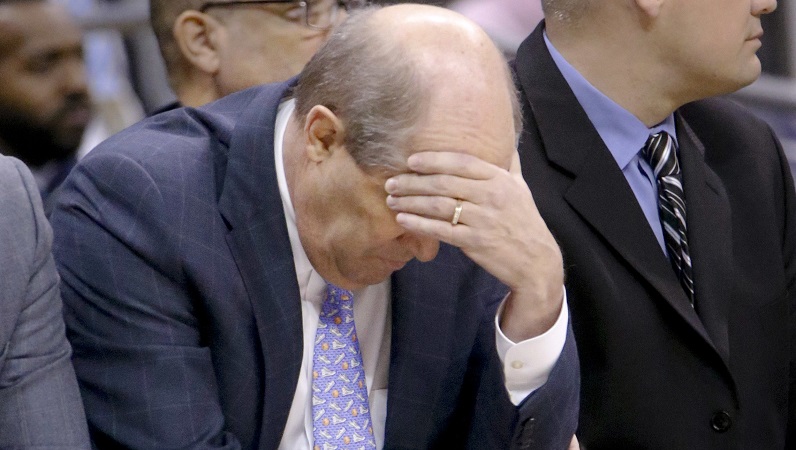 On Thursday of the ACC Tournament, Pittsburgh decided to part ways with basketball coach Kevin Stallings. The move comes less than two years after Stallings was hired to replace Jamie Dixon — now at TCU.

The Panthers lost 19 straight games this season, and went 0-18 in ACC. That’s obviously not great; however, parting ways with a Division I basketball coach — one that hasn’t been mired in scandal — after only two seasons is rare.

It was a tough decision, but likely the right call, too. While up in Brooklyn for the ACC Tournament, I decided to ask a handful of ACC basketball experts why — from a variety of perspectives — the decision for Pitt to part ways with Kevin Stallings was necessary.

At a quick glance, many ACC fans may think Pitt simply couldn’t afford to fire basketball coach Kevin Stallings and pay most or all of his reported $9+ million buyout.

Upon further review, to borrow a phrase from the instant-replay era, it becomes obvious that Pitt simply couldn’t afford to KEEP Stallings.

With an annual athletic department budget that only recently surpassed $60 million, Pitt ranks in the bottom half of the ACC in that regard. Without a football powerhouse, which pays the bills at many schools, it may seem logical to assume that the Panthers couldn’t afford to pay Stallings $9 million (or something in that neighborhood) to walk away, only to have to splurge for another seven-figure annual compensation package for his replacement. Paying two basketball coaches isn’t exactly economical.

However, first-year Pitt athletic director Heather Lyke (hired in March 2017) need only read recent university spreadsheets to appreciate what Pitt can produce — and has produced recently — for the athletic department as a whole. Her decision to dismiss Stallings was based not on a hypothetical scenario on what the Panthers could be or might be in basketball; rather, it reflected her understanding of what Pitt hoops actually provided, financially and otherwise, as recently as two years ago.

In 2015-16, the final season of coach Jamie Dixon’s overwhelmingly successful 13-year tenure, Pitt actually ranked among the 20 most lucrative college basketball programs in the nation. On the court, the Panthers finished 21-12, 9-9 in the ACC, tied for ninth in the conference, and made the Big Dance. It was a good season, but not a great one, by Dixon’s standards. Yet fan interest still was relatively high, home attendance was strong, the team was competitive and entertaining, and all of that was reflected in the team’s finances.

According to the United States Department of Education, the program pulled in $16 million — much less than ACC hoops heavyweights Louisville, Duke, Syracuse and UNC, but also more (and typically much more) than the other 10 programs in the ACC that year.

Since then, in two years under Stallings, fan interest waned, season-ticket sales plummeted, and attendance became downright dreadful. In Year One (16-17, 4-14 and tied for 13th in the ACC) under Stallings, the Panthers had their worst attendance (8,327 per home game) since … 1982. Year Two (8-24, 0-18) was dismal on the court, of course, and attendance actually went down ANOTHER 50 PERCENT, to 4,117 per game. The word embarrassing fit Pitt basketball in more ways than one.

So, yes, paying $9 million (or whatever) to somebody NOT to coach is a painful predicament, and having two basketball coaches on the payroll (Stallings and whoever’s next) is never fun.

But when your financial bottom line is multiple millions per year down (no final numbers are available yet) from your recently established basketball baseline, it’s easy to foresee making up that unexpected, unfortunate $9 million expense with just a year or two or more normalized, Dixon Era-like financial numbers.

Never really understood the hiring of Stallings in the first place. On the heels of Ben Howland and Jamie Dixon, you’d think the program would have been in better position to take their time and find a better fit.  Stallings was okay at Vanderbilt (138-142 in SEC play), but hardly a standout. Plus, Kevin had a rep as being somewhat cantankerous which was never going to be good heading into a transition.

And on top of it, they owe him $9.4 million to NOT coach?  These are the decisions that set programs back decades. See Georgia Tech.

I don’t think it’s an “auto-fire” situation when a coach goes winless in the ACC. Jim Christian did it two years ago at BC and there’s no question that he has his program trending in the right direction now. But there’s a personality component with Stallings that’s really hard to ignore. It was there at Vandy, and it’s certainly been there at Pitt, too. Fans stopped going to the games. Players left the program. There’s no media choosing to have his back in the press.

As a Duke guy, it’s easy to see a lot of parallels between Pitt basketball and Duke football. Christian at BC feels a lot like early-career David Cutcliffe and Kevin Stallings feels a lot like Ted Roof and Carl Franks. In the absence of results, at least have hope. And there’s no hope in Pittsburgh. It may not be fair to blame Stallings, but it certainly wasn’t going to change if they kept him around.

I heard from a Wake Forest Athletics official that when Wake Forest played at Pitt, there were less than 1,000 people at the arena — but they announced it as 2,400. It’s quiet in the Petersen Events Center; you can hear everything that’s being said.

At one point in the second half, Kevin Stalling yells at official Mike Eades about a foul that’s been called on a Bryant Crawford drive.

According to people that were there, Eades looked at Stallings as if he wanted to give him a technical, but decided against it — perhaps out of pity.