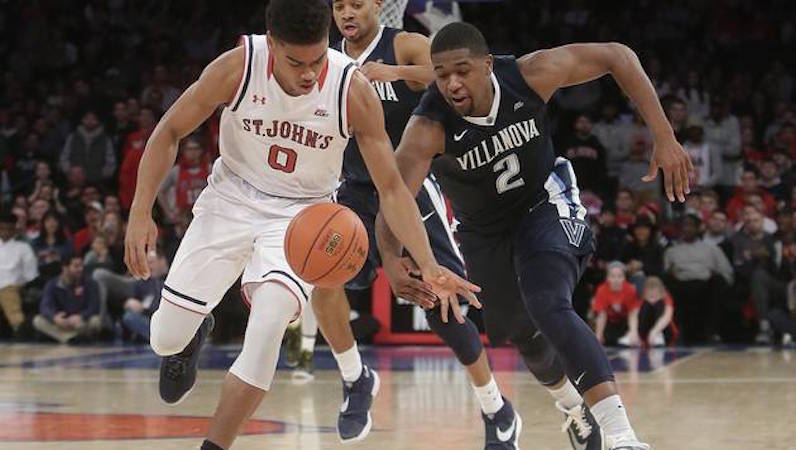 Villanova's Kris Jenkins (2) and St. John's Malik Ellison (0) fight for the ball during the second half of an NCAA college basketball game Sunday, Jan. 31, 2016, in New York. (AP Photo)

Welcome to the ACC, Malik Ellison. I am sure Pittsburgh is happy to have you. As we have discussed in this space before, Pitt basketball has an uphill battle set for next season. Kevin Stallings and the Panthers will be faced with replacing the vast majority of their talent and production from this past season. The transfer of Cameron Johnson — a gifted long-range shooter —  was a major blow, in particular.

However, Pitt received good news this week: Malik Ellison — a St. John’s transfer — announced that he would join the program.

Ellison is not a savior and will not even be eligible until the 2018-19 season. But he does present an interesting offensive option down the road for the Panthers.

This season at St. John’s, Ellison connected on 34.1 percent of his three-pointers on better than 2.7 attempts per game. That is a decent clip and volume of attempts, which foreshadows a player who could potentially grow into a more accurate perimeter shooter. Ellison shot just 30 percent on catch-and-shoot opportunities, though, according to Synergy Sports. So, he will have to make some pretty serious strides here.

It is better to give than to receive…sometimes

It should be encouraging for Pitt fans that Ellison can create for others. He may have to be a lead dog scorer for Pitt when he becomes eligible, or he may work as a secondary option. Regardless, it is positive that he can set up teammates.

The vast majority of Ellison’s minutes came at the small forward position for Chris Mullins and the Red Storm this season. According to KenPom.com, Ellison assisted on nearly 19 percent of his teammates’ made field goals when on the floor this season. Over half of those assists — 54.7 percent — led to three-pointers, per Synergy. It is an asset to have a 6-6 playmaker on the wing. Pitt must now find other players to slot around Ellison.