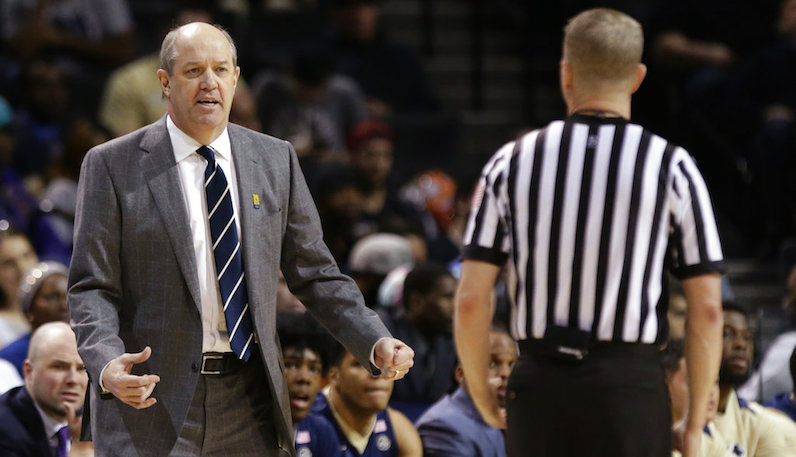 Pittsburgh head coach Kevin Stallings argues a call with a referee during the first half of an NCAA college basketball game against Notre Dame in the first round of the Atlantic Coast Conference tournament Tuesday, March 6, 2018, in New York. (AP Photo/Frank Franklin II)

According to Jon Rothstein, a college basketball insider for CBS Sports: Pittsburgh has parted ways with basketball coach Kevin Stallings. This comes mere hours after a report that Pitt athletic director Heather Lyke, Stallings and attorneys were set to meet Thursday morning. That meeting was reportedly set to discuss a buyout.

Pitt has parted ways with Kevin Stallings, per a source.

According to Colin Dunlap of 93.7 The Fan, the buyout for Kevin Stallings was set at $9.4 million; however, multiple Pitt sources insisted a $7.5 million offer was made and declined.

This news comes out two days after Pitt was eliminated from the ACC Tournament, which capped a 19-game losing streak for the Panthers. Pitt is the second ACC basketball team to finish with an 0-18 conference record.

Kevin Stalling coached Pitt for only two seasons; in that span of time, the Panthers went 24-41 overall — a win percentage of 36.9 percent. The Stallings-led Pitt teams went just 4-32 (11.1 percent) in the ACC.

Prior to arriving in Pittsburgh, Stallings coached Vanderbilt for 17 seasons. In that time, Vanderbilt made seven NCAA Tournament appearances.