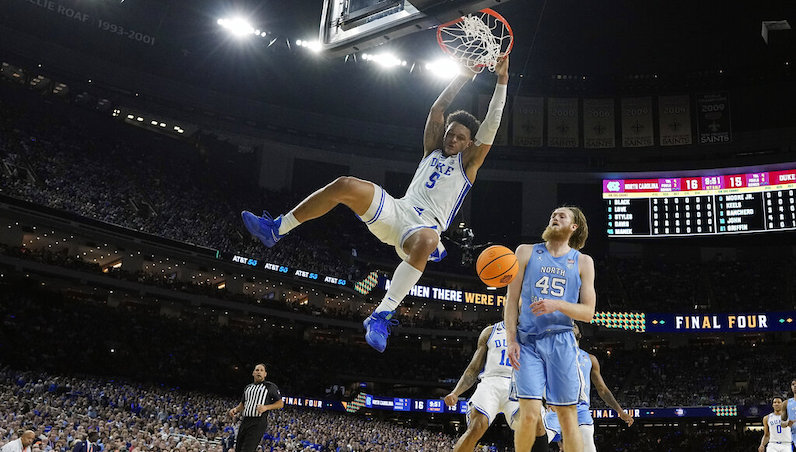 Duke forward Paolo Banchero (5) dunks ahead of North Carolina's Brady Manek (45) during the first half of a college basketball game in the semifinal round of the Men's Final Four NCAA tournament, Saturday, April 2, 2022, in New Orleans. (AP Photo/David J. Phillip)

Paolo Banchero’s freshman season ended with a disappointing loss to North Carolina in the Final Four. However, Duke’s star forward was, once again, brilliant: 20 points, 10 rebounds, two assists and two steals. It was a fitting coda for Banchero; in a game for the ages, the Seattle native reaffirmed his status as one of the top prospects for the 2022 NBA Draft.

An all-around talent, Banachero led Duke’s roster in usage rate this season (27.2 percent), while ranking second in both assist rate (17.5 percent) and defensive rebound rate (19.1 percent). Banchero saved his best for last this season. As the stakes rose, Banchero’s game only got better.

He’s a special playmaker; the court mapping and vision are so impressive. Banchero finished the season with a positive assist-to-turnover ratio as well: 124 assists, 92 turnovers. (Per 40 minutes: 3.9 assists, 2.9 turnovers)

According to Pivot Analysis, Duke was +452 in 1,249 minutes with Banchero on the floor this season. The Blue Devils posted a net rating of +22.2 points per 100 possessions in those minutes.

Banchero was named First Team All-ACC and to the AP All-American roster. He is the final All-American player to be coached by Mike Krzyzewski.