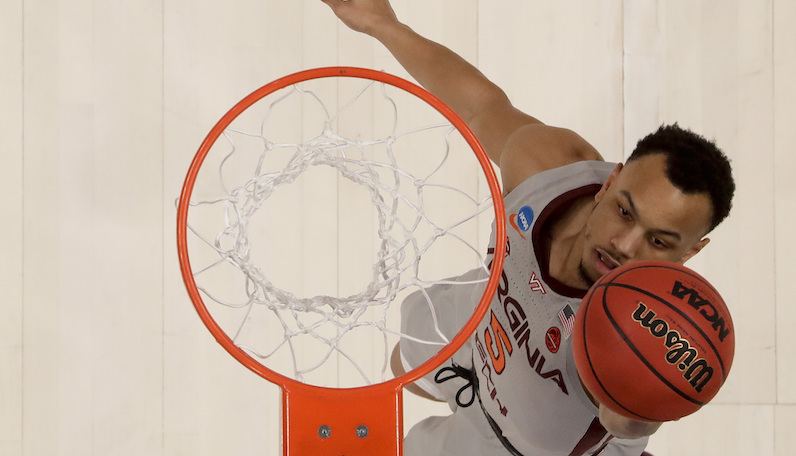 As the ACC advances five men’s basketball teams to the 2019 Sweet 16, it knows that at least one will push through to the Elite Eight. That’s because two of those teams — Duke and Virginia Tech — will meet in third round play.

Before the Hokies and Blue Devils tip-off on Friday in Washington D.C., though, let’s look back at what happened when these two teams meet prior — just four weeks ago, in what seems like a world away.

[If you missed Part 1 of our Duke-Virginia Tech preview, make sure to check that out: the return of Zion Williamson, how VT defended Duke back in February, and what UCF did in the round of 32 to counter Duke’s lack of shooting.]

By that point in February, the Hokies were going on a full month of life without Robinson. In that time, Tech rebuilt its offense on the fly. After the pivot, everything ran through Nickeil Alexander-Walker or Kerry Blackshear Jr. as the Hokies used the pinch post, nail and foul-line extended areas of the floor as hubs for offense.

With Zion and Robinson back in the mix, the excitement is ramped up for a Sweet 16 rematch. Here’s a look at Virginia Tech’s offense, and what the Hokies can do to pull off an upset.

Duke Game: How they checked NAW

During the last meeting, Virginia Tech ran its offense exclusively through Alexander-Walker and Blackshear (both played 40 minutes) — high-post looks or NAW pick-and-rolls. When the Hokies went with high ball screens for NAW, Duke mixed up its coverages. For the most part, though, Duke sent multiple defenders to double or trap the future first round pick.

The Blue Devils forced other Hokies to hit shots; fortunately for Buzz Williams, NAW is an advanced passer with good vision, and that night Tech’s wing shooter hit from deep.

On this stack look, note how high the initial screen is from Blackshear — and the gap between he and Hill, ready for lift action at the free throw line, which will draw Alex O’Connell out of the paint. After the ball screen on Cam Reddish, NAW is able to get a little separation and play downhill.

Without Zion, it’s rare minutes for Marques Bolden and Javin DeLaurier on the floor together. DeLaurier ventures way off Outlaw (45.6 3P%, 69.8 eFG% on catch-and-shoots) in the weak-side corner to help at the rim. NAW makes the obvious read.

As I’ve noted before, Virginia Tech — with either Alexander-Walker or Blackshear as the fulcrum — used the pinch post/elbow-extended area of the floor to operate its offense from during ACC play. In the win over Duke, this was no different.

Alexander-Walker catches the passes and has Duke’s entire defensive focus on him, including Tre Jones, who shades in his direction. The Hokies cut hard and with a purpose, though. Bede moves away from NAW after being ditched by Jones as Hill sprints around the split screen from Blackshear. Reddish reads a switch, but with Jones freelancing to help on NAW, there’s no one to match with Hill.

This is another look Tech ran a lot with Robinson on the bench: flash Blackshear to the nail — the exact middle of the free throw line — and run scissor cuts off that action (looking for quick-hitting handoff).

Hill scores on a handoff from Blackshear here; however, if that initial action wasn’t available, the All-ACC big man would have the option to turn and face, and look for his own offense.

Of note: Duke didn’t switch on this play. RJ Barrett is already trailing after a switch with Reddish; in theory, it would be tough for him to get in a good defensive position against Blackshear. There’s also the thought that Duke wouldn’t want a smaller defender on the bruising Blackshear.

According to Synergy Sports, Blackshear shot 52.3 percent and scored 1.04 points per possession on post-ups in the 2018-19 season — a top-20 number nationally (minimum 100 possessions). Blackshear absolutely feasted against single post coverage this season. He can always get to his spots.

With Robinson back, life is different NAW

Things have changed now, though, for Virginia Tech. The return of Justin Robinson means Tech can play a little more conventionally on offense — more straight screen-roll action with weak-side 3-point shooting. The Hokies now have two of the top pick-and-roll guards in college basketball to run the show on offense.

According to Synergy, Tech scored 1.1 points per possession when both Robinson and NAW passed out of pick-and-roll this season. Virginia Tech didn’t have its fastball in its second round win over Liberty (1.07 points per possession), but once again, you could see the framework of one of the nation’s most dynamic offenses.

That’s vintage Hokies offense with this group of players: high ball screen, basket roll forces help, which leaves a knockdown shooter open for three on the weak side.

Despite all of its perimeter talent and 3-point shooting, Virginia Tech doesn’t play that fast with the ball. The Hokies prefer to operate more methodically: 18.7 seconds per offensive possession (No. 307). However, give Alexander-Walker a passing angle and he’ll look to set someone up, regardless of how much time is left on the clock.

Here in the Liberty game: Blackshear sets a drag screen in transition, and NAW rewards him with an easy layup.

Go get yours, too

Alexander-Walker and Robinson are one of two sets of teammates in the ACC this season to both play 600+ minutes and post assist rates above 22 percent. (Duke’s Tre Jones and RJ Barrett are the other pair.) As much fun as those two have setting others up, they are plenty comfortable finding their own offense, too.

Robinson is an expert at splitting ball screens, and what he does on this possession — slipping through the double drag screen — is straight filth. Liberty’s defense is so worried about staying home on shooters and tagging Blackshear on the role, they forget about Robinson who, ya know, still has the basketball.

According to Synergy, Robinson and Alexander-Walker went a combined 5-of-7 shooting out of the pick-and-roll against Liberty. Blackshear was 2-of-4 on rim runs.

News from The Windy City

Virginia Tech mixes it up, too, though. They change up ball handlers, shooters and mesh points on the ball screens. Defenses must be ready to see and stop a variety of actions, including plenty of dribble handoff (DHO) looks.

This was an after timeout (ATO) play from Tech against Liberty, and it involves the entire trio of Alexander-Walker, Blackshear and Robinson. NAW enters the ball to Blackshear at the elbow and sprints to the opposite corner — as Blackshear dribbles in that direction, too. Meanwhile, Robinson exits that corner and comes off a pindown from Outlaw directly into a DHO with Blackshear — what’s known as Chicago Action.

Look at all the moving parts here — as Hill occupies help in the far corner. The pindown set by Outlaw gives Robinson an advantage going into the DHO with Blackshear; his defender is now a step behind, which makes for tricky defensive navigation at that handoff mesh point. Blackshear rolls, which forces Outlaw’s defender to hang in the paint, and it’s bombs away for the ACC’s top 3-point threat.

This type of Chicago action has been in the offense all season for Virginia Tech, but it’s easier to access with two top-line playmakers — NAW and Robinson — plus a roster full of shooters.

To effectively close this game out, the Hokies went back to this look: pindown from Outlaw for Alexander-Walker into another DHO with Blackshear. Liberty doubles NAW on the catch, which means someone has to be open on the weak side. Alexander-Walker could pitch back to Outlaw for another triple, but he decides to showoff the skills and Tech’s power roll game — fitting a signature lefty-laser pass at Blackshear, who makes an outstanding catch and finishes.

If it ain’t broke, though…

This is the challenge Virginia Tech poises to Duke; there’s just so much to defend now. Everyone in the rotation can shoot, score and pass. There are multiple players that can initiate offense, and Blackshear’s post game looms as a reliable fallback when necessary.

Blackshear shot just 1-of-7 on post-ups against Liberty, per Synergy. That’s a complete aberration for him, and instead of sulking, Blackshear (12.8 percent offensive rebound rate) got busy on the offensive glass: six rebounds and four put-back field goals.

One of the downstream benefits of Tech’s pick-and-roll attack is that it also be used to carve out post position for Blackshear. This is something you’d see Wake Forest take advantage of two seasons ago with John Collins; when the opposing big man hedges out on the ball screen, he’s left to scramble back to the block. That’s a lot of space to cover, which gives the burrowing Blackshear time to set up shop with deep post position.

Similar to the time when Robinson was out, Tech still used its post-ups as passing hubs in the Liberty win. Here’s that split post look again with Alexander-Walker as the distributor.

This season, Tech assisted on 59 percent of its field goals — good for 30th nationally in assist rate. The 6-foot-10 Blackshear — 3.1 assists per 40 minutes — plays a central role in this, too.

The disrupting defense of Nickeil Alexander-Walker