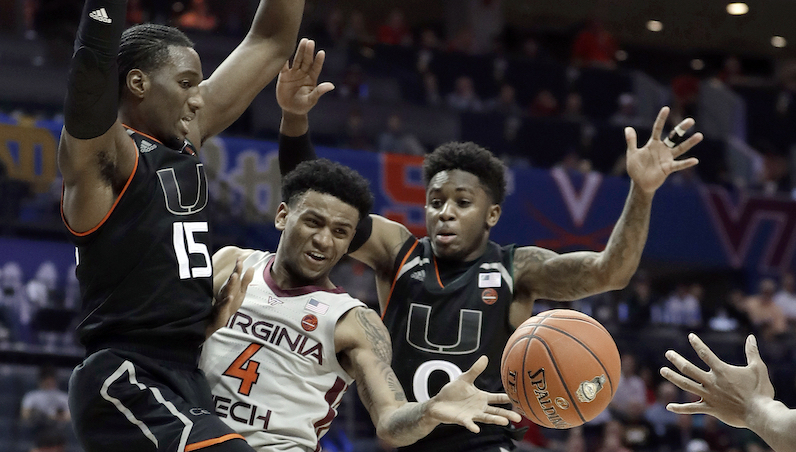 Virginia Tech made quick work of Miami on Day 2 of the 2019 ACC Tournament, winning 71-56. As has been the case since Justin Robinson went down, Nickeil Alexander-Walker and Kerry Blackshear Jr. were at the center of it, too. With those two in the middle — screen-roll action, facilitating out of the high post — the Hokies hit up the two money areas on the floor. Virginia Tech finished 13-of-17 (76.5 FG%) at the rim and 11-of-27 on 3-point attempts (40.7 3P%).

According to Synergy Sports, Blackshear has shot 58 percent on basket rolls or slips this season, which forces extra attention from help defenders. He’s also kinda good at just, like, getting in the way as opponents try to recover and closeout on shooters. Early on, the Hokies found success with Ty Outlaw (71 eFG%) lifting behind Blackshear’s treks to the rim.

Blackshear and Outlaw, working in tandem

Outlaw did most of his work in the first half and finished with 14 points and four more 3-pointers. With all of its shooters, Tech can really put pressure on opposing half-court defenses. Few teams, if any, space the floor better than Virginia Tech.

A few days after his All-ACC selection, Blackshear went for 19 points, 10 rebounds and four assists. He finished 7-of-7 shooting at the rim, too.

Two-man actions between Blackshear (his 8th game of 4 or more assists) and Alexander-Walker were devastating. Again, Blackshear worked wonderfully as a high-post passing hub. He hit Outlaw for a weak-side 3-pointer early in the first half, and connected with NAW (2-of-5 3PA) for another triple here. (Nice relocation-and-hit from NAW, too.)

Part of Alexander-Walker’s appeal as a prospect is his vision; he showcases that, of course, from the pick-and-roll, but also out of the pinch post. While on the floor against Miami, Alexander-Walker (six dimes) assisted on over 30 percent of his teammates’ field goals.

Alexander-Walker’s jump shot form is a little funky, but he’s obviously a gifted catch-and-shoot player (59.6 eFG%). He’s also shot well out of the pick-and-roll (50 eFG%) on Wednesday, too.

Once he gets going, the threat of a high ball screen becomes something to leverage. On this possession late in the second half, NAW catches Lykes leaning and rejects the screen (hat trip @5th_Factor) with a nifty behind-the-back crossover. In the line, he hits Ebuka Izundu with a lefty ball fake — into a smooth fadeaway, his only midrange field goal.

This win sets up another game with Florida State — No. 4 vs. No. 5 in the ACC — which will tip at 2:30 p.m. on Thursday. These two teams met less than two weeks ago. Florida State, after a ferocious comeback, won in overtime. In that contest, Nickeil Alexander-Walker — after a strong start — struggled against FSU’s ball pressure, turning it over four times.

Against Florida State (No. 12 in adjusted defensive efficiency) Virginia Tech will have to work harder to access the types of looks it got in the win over Miami. The Seminoles have multiple wing defenders to throw at NAW, including two of the better athletes in the ACC: Terance Mann and Trent Forrest. On the back side, Christ Koumadje and Mfiondu Kabengele offer rim protection — both with block rates over seven percent.

It will be interesting to see if Tech can lift Blackshear and also get him moving in space, which could force Koumadje and Kabengele away from the hoop. Once Tech forces help or a rotation, the Hokies can look to ping the ball around the perimeter and hunt juicy catch-and-shoot 3-pointers.