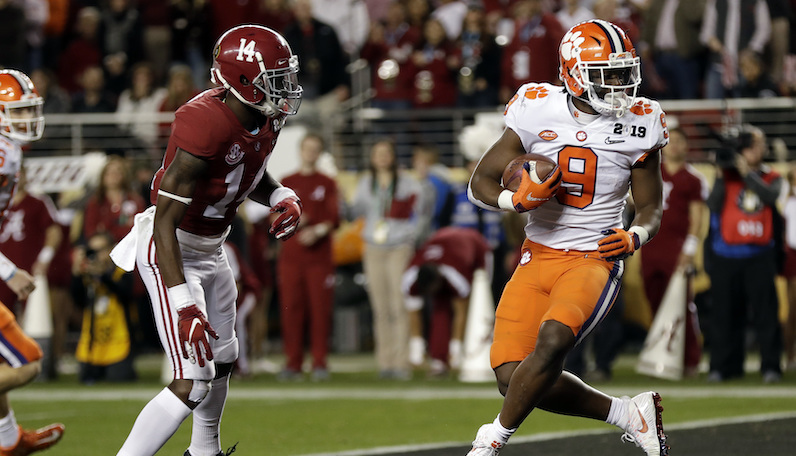 With the 2019 college football season on the horizon, let’s take a look at the top five running backs in the ACC. There’s plenty of depth at this position within the conference and — thanks to the return of Travis Etienne and AJ Dillon — there’s plenty of star power, too.

After being used in more of utility role as a freshman in 2017 — splitting out wide at receiver, before moving back to the backfield after an injury to Mark Walton — Deejay Dallas was moved to running back full-time in 2018.

Now, one of the program’s true leaders has an opportunity to build upon that strong foundation as Miami looks to make more noise in the Coastal Division.

In 2018, Dallas was one of 21 running backs in the ACC to finish the season with at least 15 carries of 10+ yards (17). He also posted six carries of 20+ yards, including an 83-yard touchdown scamper in the rain against Duke — one of the longest runs in the ACC last season.

During the 2018 season, Dallas was one of only two ACC players — along with Dazz Newsome of UNC — to post a punt return touchdown and a rushing touchdown in the same game, which came against Pittsburgh.

When workhorse back Chris Barclay left Wake Forest after the 2005 season — his third straight with 1,000+ yards — every Demon Deacon fan knew there would be big shoes to fill in Winston-Salem. That certainly proved to be true, too.

It’s a crude measure, but after 12 consecutive seasons without a 1,000-yard rusher, Cade Carney broke through in 2018: 1,005 yards rushing, 5.35 yards per carry (No. 16 in the ACC) and eight touchdowns. Nearly a quarter of his yards came during a monster performance in the regular season finale at Duke — a career-high 223 yards rushing (31 carries), the 13th-highest single game total by a Deacon rusher.

Carney, who ranked fifth in the ACC with 31 carries of 10+ yards, was one of 51 FBS players, including four from the ACC, to run for at least 1,000 yards in 2018 and average five yards per carry. As Pro Football Focus notes, the majority of those rushing yards came after contact.

If you haven't watched Cade Carney play, you are missing out. pic.twitter.com/TQLXaoukhs

Few players in the ACC have more talent than Cam Akers; however, even he wasn’t impervious to Florida State’s struggles along the offensive line last season. After rushing for 1,025 yards and seven touchdowns in 2017 — when he stepped in as a true freshman to replace the void left by Dalvin Cook — Akers ran for just 706 yards and six touchdowns during the 2018 campaign.

Cam Akers is THE man in Tallahassee. pic.twitter.com/Vrqjr3uxPs

Despite the issues up front along the line, Akers still showcased his ability to take it to the house on any touch. He caught 23 balls for 145 yards and two touchdowns — both scores coming over the final four games of the season. Akers finished his sophomore season with three carries of 50+ yards, which ranked 14th nationally.

Akers compiled 866 all-purpose yards in 2018, tops on Florida State’s roster during Willie Taggart’s up-and-down debut season. Behind an improved offensive line, though, there should be opportunities for Akers to play up to his full abilities in 2019.

Following his monster freshman season — 1,589 rushing yards (18 touchdowns, 122.2 yards per game — Dillon put together a strong sophomore campaign. While dealing with injuries, Dillon appeared in 10 games and led the ACC with 110.8 rushing yards per game.

AJ Dillon finished with more missed tackles forced than any other ACC running back this year pic.twitter.com/RWzA069OkC

Dillon was one of 30 FBS players to finish the 2018 season with 1,100 yards rushing and 10 rushing touchdowns. He posted five games of at least 115 rushing yards, including a 149-yard performance against Miami’s stout run defense.

Dillon is listed at 250 pounds and is thought to be more of a bruising, inside runner. However, he recorded three carries of 50+ yards last season. When he finds some daylight, Dillon has the ability to outrun an opposing secondary for six.

Over the last two seasons, only five players, including Bryce Love and Jonathan Taylor, have run for more yards than Dillon (2,697).

Travis Etienne, the reigning ACC Player of the Year, enters the 2019 season as one of the favorites to win the Heisman Trophy. As Clemson toggled quarterbacks at the start of last season, Etienne quickly emerged as both a rock and a rock star for the Tigers.

Etienne ran for 1,658 yards (a school record and No. 4 in the FBS) and 24 touchdowns, the most in the FBS and another program record. Within the ACC, Etienne finished just behind Dillon in terms of rushing yards per game (110.5).

Travis Etienne made his case last season as one of the top running backs in college football with some staggering numbers. pic.twitter.com/TrJLGl7g3p

As the fulcrum of Clemson’s powerful offense, Etienne put up absolutely silly numbers; he posted 23 carries of 20+ yards, good for second in the nation. During an October victory over Wake Forest, Etienne slapped together scoring plays of 59 and 70 yards. That performance was just the eighth time since 2000 that an ACC player has run for at least 150 yards and two touchdowns on 10 or fewer carries.

Etienne appeared in 15 games and totaled 216 touches on 486 snaps (44.4 percent of his total snaps). He also caught two touchdown passes, which ties Etienne with Pitt’s James Conner (in 2014) for an ACC record of 26 total touchdowns. One of those touchdown catches came during a three-touchdown performance in the national title game against Alabama.

The Tigers are stacked on offense; while most of the current conversation surrounds the ascent of Trevor Lawrence, Etienne and the rest of Clemson’s skill players deserve plenty of recognition, too. That’s pointing out the obvious; however, if Etienne can repeat his 2018 effort this season, it’s hard not to see Clemson running the table, again.

The fast numbers behind the ACC’s top quarterbacks