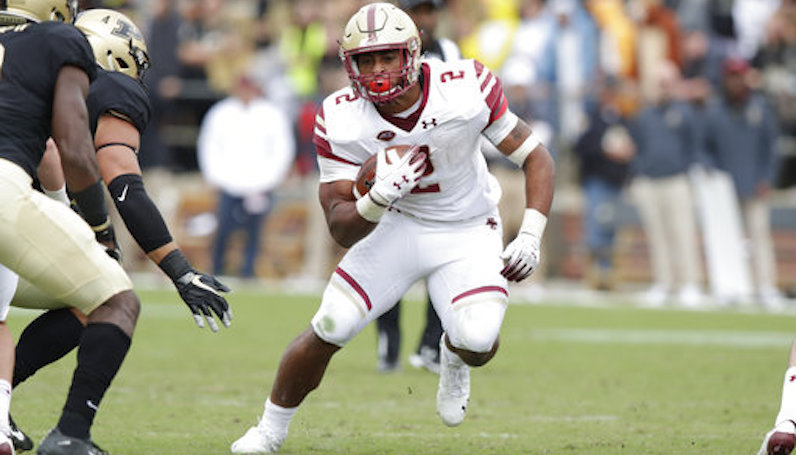 While on the ACC coaches teleconference this week, Boston College coach Steve Addazio made the claim that star running back AJ Dillon (ankle) is a game-time decision for the NC State game this Saturday. After running for 161 yards and two touchdowns on 28 carries — most of which came in the first half (146) — in the win over Temple, Dillon left with an ankle injury.

Dillon, the ACC’s leading rusher (652 yards on 106 carries, 6.2 per carry), has been unable to practice this week. “We’ll just have to wait and see how much improvement he can make in the next few days,” according to Addazio.

To the surprise of no one, Dillon has been a force on offense this season; if he can’t go on Saturday against Ryan Finley and NC State’s pass attack, BC could be in trouble. They will need to generate offense, somehow.

So far this season, Dillon has 13 carries of 10-plus yards and seven of 20-plus yards, including a long of 74 yards.

Behind AJ Dillon, BC has a couple of capable ball-carriers: Ben Glines and Travis Levy. Glines, a wide receiver by position (eight targets, five receptions in 2018), is second on the team with 33 carries for 175 yards (5.3 per carry); last week against Temple, Glines had a career day — 120 yards on 23 carries. For the season, Levy has 24 carries for 74 yards.

Quarterback Anthony Brown has had a really nice 2018 campaign, after a non-contact leg injury in the NC State game last November cost him the remainder of 2017. His worst game of the season, however, occurred two weeks back — the loss at Purdue: 13-of-27 (48.1 percent) through the air for 96 yards (3.6 yards per attempt) and four interceptions.

If Boston College can’t set up play action pass without Dillon, the Eagles could have trouble against a defense that ranks 29th in the FBS in S&P-plus, per Football Study Hall.

The Most Targeted Receivers in the ACC: Greg Dortch is a Beast