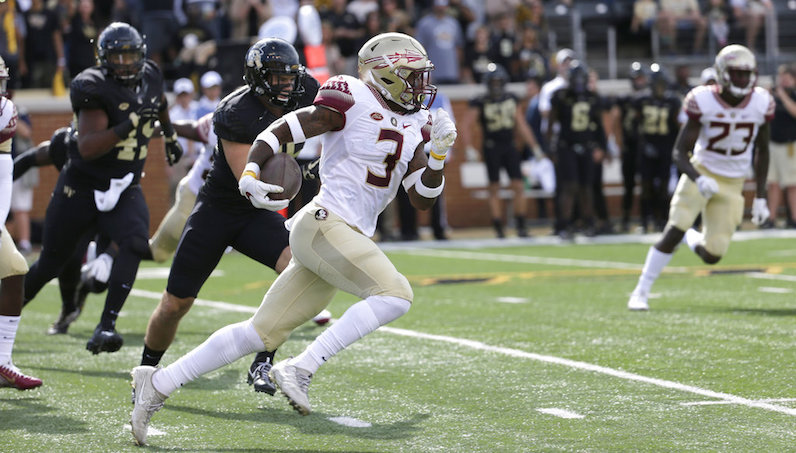 Every year, football offenses get more spread, and more advanced in how they move the football through the air. The concepts may stay the same, but the designs — spread nature of the sport — and distribution methods evolve. With that, more players become involved in the pass game, too: receivers, tight ends and running backs.

With that in mind: Who are the best receiving running backs in the ACC? Let’s find out!

According to the outstanding Football Study Hall, which tracks receiving targets (bless them for this), there were 25 running backs in the ACC last season that recorded 15 or more targets — and posted a target rate above three percent.

That number of 25 comes with a bit of an outlier, though; two of those players were Virginia’s Olamide Zaccheaus and Jaylen Samuels of NC State — slot players that lined up all over the field. For the purpose of this, we will count those two players.

(Note: Virginia Tech’s Sean Savoy could’ve been added here as well — 24 rush attempts, 39 receptions — but the team’s athletic site lists him as a receiver. Perhaps it’s too rigid, or misguided, to use that as the distinction, but that’s where we are.)

Obviously, Zaccheaus is a pretty big outlier here; he frequently lines up slip-out in Virginia’s offense. He finished third in the league last season in receptions (85), and second in targets (140). According to Sports Reference, Zaccheaus and Samuels were two of only three FBS players to record at least 75 receptions and 20 carries. (Note: Virginia’s official athletic site lists Zaccheaus as a running back.)

The 2017 season was a struggle for North Carolina, obviously; however, Jordon Brown — along with Anthony Ratliff-Williams — provided some moments of joy on offense. Brown, who ran for over 51 yards per game (17th in the ACC), caught 29 passes on 37 targets (second most amongst returning backs).

Nearly 10 percent of UNC’s pass targets were directed to Brown — which is noticeable — and he hauled in over 78 percent of them, which is also good. According to Football Study Hall, Brown posted a Success Rate of 51.4 percent — also good.

After a productive freshman year — 1,025 rushing yards, 5.4 Highlight Yards per Opportunity — Cam Akers returns for his sophomore season at FSU as one of the ACC’s top skill players. Akers teamed up with fellow running back Jaques Patrick for 44 targets — 13.6 percent of Florida State’s total targets — 37 receptions.

Now, part of this was because true freshman quarterback James Blackman threw so many of his passes at or near the line of scrimmage — areas where running backs are likely to be targeted. However, a catch rate of 88.9 percent and a Success Rate of 55.6 percent for Akers are efficient numbers.

There’s plenty of reason to be excited to Akers as a ball-carrier in 2018, and as a receiver, too. He has dual-threat potential.

Jaylen Samuels, the ACC’s premier all-purpose threat, was one of 11 players in the league last season to record 90 or more targets, per Football Study Hall — 98, in fact. With his departure to the Pittsburgh Steelers, plus that of Nyheim Hines (35 targets, 26 receptions) to the Colts, NC State has a bit of a vacuum in the pass game: Who gets those targets?

There are plenty of other options, including returning back Reggie Gallasphy, who will be expected to contribute more, in a variety of ways.

After a somewhat slow start to his freshman season, AJ Dillon went bonkers for Boston College: nearly 1,600 yards on the ground and 5.8 Highlight Yards per Opportunity. There’s a case to be made that he’s the best running back in America, now.

Clearly, Dillon had an enormous workload; as a rookie he carried the ball 300 times, which is a ton, including 211 carries over the final seven games (30.1 per game). Dating back to 2000, he’s the only ACC freshman to record at least 300 carries in a season.

He had plenty on his plate; that’s obvious. However, it’s still a little interesting to see he little he was involved in the pass game. Not only did Dillon not record a reception, but according to Football Study Hall, he wasn’t even targeted once last season.

Temperature Check: Is Mike Norvell’s seat at FSU the warmest in the ACC?