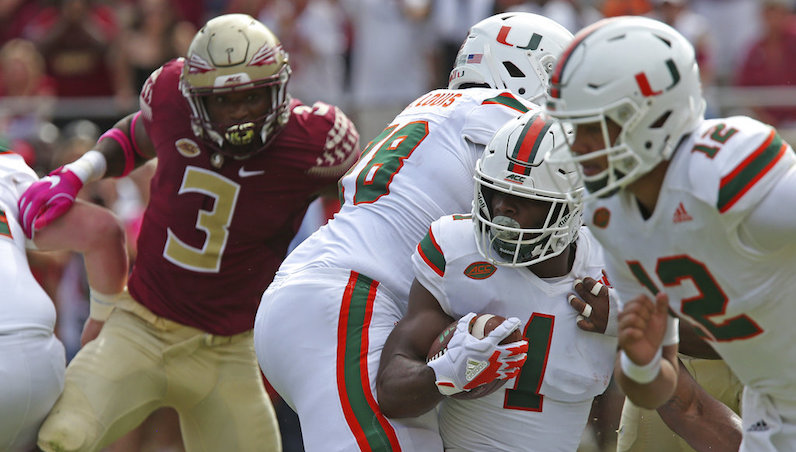 News leaked out on Sunday that confirmed what many Miami and college football fans feared. Miami’s All-ACC running back, Mark Walton, will more than likely miss the remainder of the 2017 season due to surgery on his right ankle.

Walton, who was already hobbled prior to Saturday, injured the ankle on a fourth quarter run against Florida State.

The No. 11 Hurricanes have yet to lose this season, and have an emerging quarterback, but just how badly will the loss of Walton hurt?

In a league of his own

Mark Walton entered 2017 as the ACC’s best running back; through the first four games of the season, he’d done nothing but reaffirm that. The junior back is third in the ACC in rushing yards per game (107).

Walton had struggles against Duke and FSU, but he’s an industrious and efficient runner. According to Sports Reference, Walton is the only ACC player to average better than seven yards per carry on at least 50 carries.

Miami’s offensive line has been pretty darn good run blocking this season. The Hurricanes rank No. 1 nationally in Opportunity Rate — 51.5 percent, per Football Study Hall. This means on over half of Miami’s carries this season, the line has created at least five yards of running room.

However, Walton does damage in the open field, too. Walton is averaging 8.8 Highlight Yards per Opportunity — one of the best figures for any player in the nation with 50-plus carries. Walton will conclude his season with 13 carries of 10-plus yards.

Now that Walton is out for the rest of the season, a great deal of stress will be placed atop a position group that’s not exactly loaded in terms of experience.

Sophomore back Travis Homer — a former 4-star recruit — will have to step up for Miami; it can’t be all Malik Rosier ran-pass option.

As the No. 2 back, Homer gave the Canes something off the bench. The sophomore averages 8.5 yards per carry and 7.5 Highlight Yards per Opportunity, per Football Study Hall. He even ripped off a 40-yard touchdown against Duke’s powerful run defense — the longest run of his career.

Homer has to ability to be a big-play threat for Miami — 40 percent of his carries have gone for at least 10 yards this season. He has also caught five passes on six targets — for 71 yards.

Replacing an NFL prospect like Walton is no easy feat, though. However, if Homer can can hold the fort down as Miami’s lead back, then this team has the ability to keep its undefeated season alive.

Why the return of Ahmmon Richards means to much to Miami