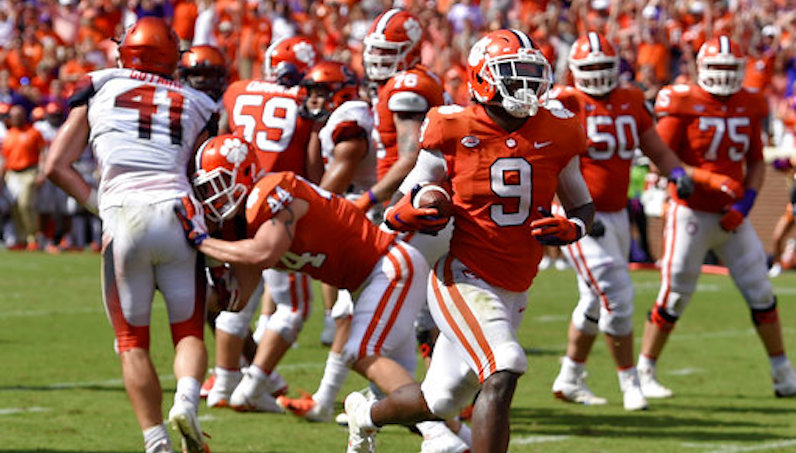 After Clemson raced back to stave of a potential disaster and beat Syracuse in Death Valley, my mind quickly wandered to: “Man, Travis Etienne probably deserves some Heisman Trophy buzz, right?” Etienne has been on the warpath this season, and against the Orange he put down the best performance of his college career. (Note: the good folks at Shakin The Southland got something up about this earlier in the week, too.)

The sophomore running back was superb: 203 yards on 27 carries and three touchdowns — all of which were career highs.

That’s been part of a more broad trend with Etienne this season; he’s now the official back in Clemson’s high-powered operation. Regardless of who’s at quarterback, the ball needs to find Etienne 20-plus times per game. He now has three straight games of over 120 yards on the ground.

Currently, Etienne ranks first in the ACC in yards per carry (8.2) and rushing touchdowns with eight. He’s second to only AJ Dillon in total rushing yards (594) and yards per game (118.8).

Etienne doesn’t do much in the way of catching passes out of the backfield, which doesn’t help his Heisman case; however, he’s caught five of his six targets (23 yards and a touchdown) so far this season, per Football Study Hall.

Clemson’s offensive line has done an excellent job run block this season, especially for Etienne. The Tigers rank 18th in the FBS in Opportunity Rate, according to Football Study Hall; over 54 percent of their carries of have for at least five yards. Etienne has a solo Opportunity Rate of 63 percent, which is insane.

However, Etienne — to the surprise of literally no one — has been a beast in the open field. As Pro Football Focus noted, he forced eight missed tackles in the win over Syracuse. Etienne is also averaging an additional 7.2 Highlight Yards per Opportunity in 2018, too. That’s an outstanding number.

As college football has evolved on offense, the game has become more spread; teams play faster and feature quarterbacks in more efficient pass/run looks. Guys like Johnny Manziel, Marcus Mariota and Lamar Jackson — dual-threat stars — can really shine. They end up collecting a lot of hardware, too.

Of that last dozen Heisman Trophy winners, 10 have been quarterbacks. In that timeframe, the only two non-quarterbacks to win the coveted award were Alabama running backs: Derrick Henry and Mark Ingram Jr.

Within that group, only one of the 10 quarterbacks — Sam Bradford — ran for under 200 yards in his Heisman season. Jameis Winston and Troy Smith don’t fall into the dual-threat archetype either, although in 2005 Smith ran for 611 yards and 11 touchdowns on 136 carries. The rest of this pool of players, though, light it up through the air and on the ground.

Also of note: some of those quarterbacks, like Manziel and Mariota, functioned as the trigger men for some of the premier go-go offenses in college football. Surrounded by future pros at the skill positions, those guys also had more opportunities to pile up stats.

Earlier this week, Odds Shark put out its odds for the 2018 Heisman race. The leaders at the top of the list won’t surprise you; the top five is all quarterbacks, too: Alabama’s Tua Tagovailoa (a heavy favorite), Kyler Murray of Oklahoma, Dwayne Haskins of Ohio State, West Virginia’s Will Grier and McKenzie Milton from Central Florida.

The point here: there’s a strong chance that this year’s Heisman winner is a pass-run quarterback.

Travis Etienne is a bit of a long shot, according to Odds Shark, but he does land inside their top 18 in terms of betting odds for the Heisman. If Clemson keeps winning, and Etienne keeps running wild, who knows. At the least, though, he’s deserving of some recognition and chatter.

Where are the wins for UNC football and Larry Fedora?