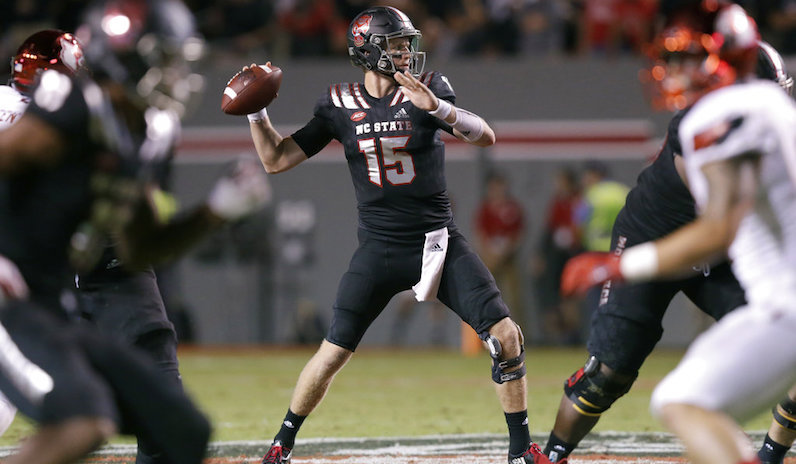 Within the ACC, there’s some serious turnover at the quarterback position. Gone are Heisman Trophy winner Lamar Jackson and John Wolford, who rewrote the Wake Forest record books a season ago. Virginia’s Kurt Benkert is in the NFL now, too. With that in mind, though: there’s still some legit NFL talent at quarterback in the ACC.

NC State’s Ryan Finley tops the list, but let’s see how everyone else stacks up.

Perhaps I should put a little more respect on Malik Rosier’s name; true be told, I debated back and forth putting him in the top five over Josh Jackson. However, the accuracy issues cloud the picture with Rosier, who completed just 54 percent of his attempts in 2017.

That said, he’s a gutsy player, a clever runner and unafraid to go down the field, vertically. Miami ranked 30th nationally in Isolated Points Per Pass Play (1.6), per Football Study Hall, and he ranked second in the ACC with 54 completions of 20-plus yards in 2017.

Josh “Action” Jackson got off to an electric start in his debut season, but as the competition intensified, the redshirt freshman had his issues. Regardless, Jackson still finished with a strong stat line: 60 percent completion rate, 7.5 adjusted yards per attempt and 20 touchdown passes — to only nine interceptions.

Virginia Tech, with Jackson running the show, ranked inside the top 45 of the FBS in both Passing S&P-plus and Isolated Points Per Pass Play, according to Football Study Hall.

The 2017 season was a bit of a roller coast in Durham for the Blue Devils — a hot start, followed by midseason doldrums, and then a strong finish. In the midst of that storm was quarterback Daniel Jones, who put a decent numbers, but was plagued by a receiving corp that struggled to create consistent separation and catch balls. He was also sacked 28 times, which is really not great.

Jones, at 6-foot-5, certainly looks the part of an archetypal quarterback; plus, he can run, too: 14 career rushing touchdowns in 25 games. He’s an aggressive downfield passer, but not super accurate: a completion rate of 57 percent, and an average of just 5.5 adjusted yards per attempt. In 13 games, he completed just 34 passes of 20-plus yards — about 7.5 percent of his total pass attempts.

However, in terms of talent alone, Jones is special, and certainly has an NFL future on his horizon. Most of his top receivers are back, including excellent tight end Daniel Helm, and it’s his third season running David Cutcliffe’s offense. With a terrific defense on the other side of the ball, led by linebacker Joe Giles-Harris, Duke will be in plenty of games. It’s up to Jones to bring them home.

Well, this is sorta awkward, right? Bryant is one of the most explosive and efficient quarterbacks in the country, but as he enters his senior season, he’s competing for his job. By this time next season, could we rank Trevor Lawrence as the No. 1 quarterback in the ACC? Sure, why not?

Back to Bryant, though: he’s a really good player. In 2017, as the replacement to Deshaun Watson’s throne, Bryant completed 65.8 percent of his passes and ran for 11 touchdowns, too. If you factor yardage lost from sacks back into his rushing total, Bryant averaged over five yards per carry.

Injuries derailed a chunk of his junior season, but Bryant posted an adjusted completion percentage of just under 74 percent, according to Pro Football Focus — tops amongst returning ACC signal callers.

If Bryant plays to his potential, the Tigers are back in the College Football Playoff, and the pause button gets hit on the Trevor Lawrence era of Clemson football.

One of the most underrated offensive players in college football, Eric Dungey is a true dual-threat quarterback. A high-usage passer (nearly 42 pass attempts per game), Dungey is an excellent runner, too: nine rushing touchdowns, and an excellent 7.1 Highlight Yards per Opportunity, according to Football Study Hall.

Syracuse under Dino Babers is committed to spreading the field and playing with tempo. The Orange ranked ninth nationally in pace a season ago, per Football Study Hall. It’s on Dungey to be the point person for the offense.

Eric Dungey returns to call the shots for Syracuse this fall pic.twitter.com/Tye7zNleeK

In an offense that features a lot of underneath targets, Dungey averaged just 6.3 adjusted yards per attempt, according to Sports Reference. Dungey also recorded 99 completions of 10-plus yards, despite playing in only nine games — eighth in the ACC.

High volume, high efficiency. In his second year as a starter for NC State, Ryan Finley took his game to another level — evolving into one of the most efficient passer in the nation. Finley was one of only eight FBS quarterbacks to complete at least 65 percent of his passes, throw for over 3,500 yards and fewer than 10 interceptions in 2017. He’s joined in this group by Baker Mayfield and Mason Rudolph — among others.

With Finley at the helm, and one of the nation’s most dangerous receiving corps, NC State ranked inside the top 20 nationally of Passing S&P-plus and Success Rate, per Football Study Hall. According to Pro Football Focus, Finley ranks second in adjusted completion percentage (73.5 percent) amongst returning ACC quarterbacks.

Jaylen Samuels is gone; there’s some turnover along the offensive line, too. However, the Pack is loaded at receiver again, and Finley is all set-up for a big final season.

Virginia Tech: Who will Josh Jackson target in 2018?